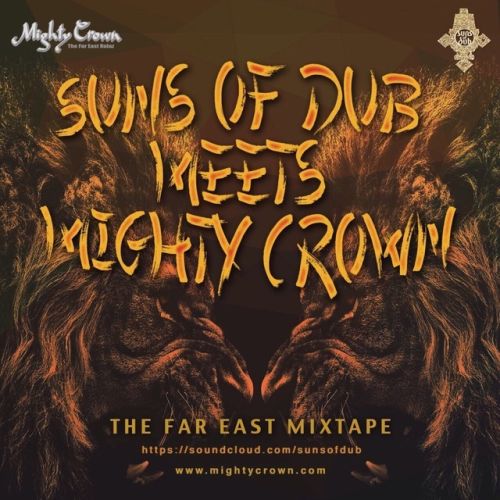 Mighty Crown Teams Up with Suns of Dub for Explosive Mixtape

International sound system Mighty Crown is no stranger to collaborations. From music to sneakers and apparel, the “Far East Rulaz” have reveled in the success of joining forces with powerhouse brands. Well, on the music home front, the sound has outdone themselves this time around, scoring a collabo with the infamous Suns of Dub, yielding the “Suns of Dub Meets Mighty Crown: Far East Mixtape,” which hit the streets today. The exclusive mixtape is available for the world’s listening pleasure at http://www.soundcloud.com/sunsofdub. Heavy promotion of the project has garnered the attention of the masses and without question has made “Suns of Dub Meets Mighty Crown” the most anticipated Reggae mixtape to hit the streets this year.

Mighty Crown co-founders Masta Simon and Sami couldn’t have been happier when Suns of Dub head honchos Addis Pablo and Ras Jammy approached them about doing a mix. “I couldn’t have thought of a more innovative group of people to create this mixtape with…there was a natural flow,” says Masta Simon, who describes the effort as “all about dubs, roots and reggae.” Mighty Crown’s management team Irish and Chin adds, “This is a really good look for Mighty Crown. This project inevitably allows Mighty Crown to further exhibit their passion for Reggae music and culture, while aligning their brand with a dynamic music industry collaborator, Suns of Dub.”

Incorporating pre-released songs from Suns of Dub, Mighty Crown dub plates and remixes, the unprecedented mix features a host of top artists including Chronixx, Jesse Royal, Midnite, Prince Ala and many more! According to Sami, following just one recording session with Suns of Dub, he was completely sold on the idea. While Sami was instrumental in getting the project off the ground, he salutes fellow sound members Cojie and Simon for taking full control of the mixes.

The renowned Suns of Dub, owned and operated by Addis Pablo and Ras Jammy, is a label, group and performing dub-production team, who have thrilled the world with their ingenious dub production and sought-after style of merging live instruments (melodica), dubbing, deejaying and composition into one musical entity. In carrying on his father’s musical legacy, Addis Pablo presents Suns of Dub as the Official Dub/DubStep platform of this GenIration for Augustus Pablo’s Rockers International.

The long awaited “Suns of Dub Meets Mighty Crown” mixtape is one of several projects the Irish and Chin managed sound system has pegged for this year. With no signs of slowing down, “The Far East Rulaz” are fresh off the heels of a sold-out performance in Antigua, will hit Canada this weekend and later this Spring, the U.K. In fact, much to their credit, the International sound will play London’s famed O2 Brixton Academy in May (for “More Life 2015), where the likes of top acts Madonna, Bob Dylan, Marcia Griffiths, Jr. Gong, Nine Inch Nails have once performed. Last, but surely not least, the influential sound will once again rock the landmark “Welcome to Jamrock” cruise in December 2015!