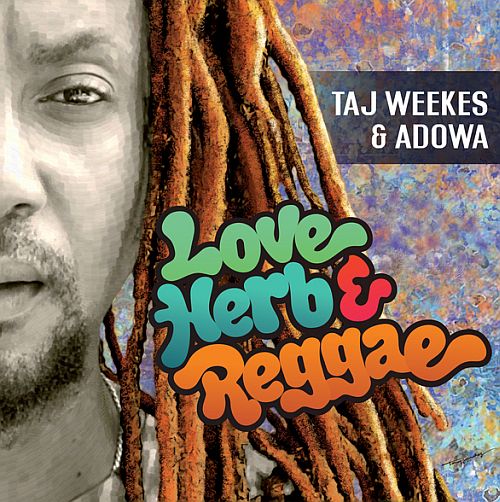 Jatta Records (New York) is proud to announce the release date for Taj Weekes & Adowa’s much anticipated fifth album. Love Herb & Reggae is slated for release in February 2016 through VPAL, the distribution arm of VP Records.
As a timely and even necessary update of the decades-old “sex, drugs and rock’n’roll” thinking, this powerful album expounds on social themes with a progressive approach that for many will be an abrupt, refreshing change from the kind of reggae they’re used to.

Yet roots reggae it definitely is, in its insinuating rhythms, sparkling arrangements and outstanding musicianship. Consider that almost since its incarnation, reggae has seemed intent on changing the world. Far too often, though, its more recent calls to action have been reactionary, obstructive and insular – so much so that “progressive roots reggae” has seemed an oxymoron. But now along comes Love Herb & Reggae to demolish any such expectations, pulling the whole scene forward with an openhearted, enlightened outlook. Nonetheless, the passionate call for a necessary revolution in society remains intact.

Singer-songwriter Taj Weekes explained how his commitment as a Rastafarian to a better world resulted in his most political album to date. “The Rasta philosophy helped shape me,” he said. “I’ve always spoken for what’s right, but in my songs I held back a bit. Now I want to shout it out for everyone to hear. No more Taj the person and Taj the musician – after all, they are one.”

Indeed, they are one. Weekes’ lyrics are a reliable reflection of his deep personal involvement as an activist within his community and well beyond. He has been honored with several distinguished humanitarian awards for his tireless work on behalf of children through his charity, They Often Cry Outreach (TOCO), and in his role as UNICEF Champion for Children in St. Lucia.

Not only is Love Herb & Reggae an advance for Weekes in his messaging, but as he explained, it represents a change in his creative process too. “For me this is very much a breakthrough. Previously I’d use a few chords, whatever sounded good, and sing over them; this time I carefully chose chords that not only fit the melody but would support the words. I jump from major to minor wherever necessary to get what I really want.” A similarly exacting process has clearly gone into the musical arrangements as well, with more musicians playing more varied instruments than ever before. The result is a full and satisfying sound.

For more information about the album and the artist, go to www.tajweekes.com and www.theyoftencryoutreach.org