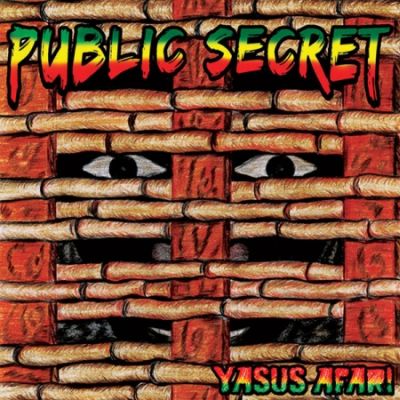 Jamaican reggae artist and dub poet virtuoso Yasus Afari brings his eclectic and celebrated brand of Caribbean music to the masses with his new album Public Secret, out now from FOX FUSE.

The digital album is available worldwide from all major digital retailers and the physical album is available from the FOX FUSE Shop. Hailed as one of reggae music’s leading lyricists and one of the world’s most prolific dub poets, Afari consistently delivers with witty, creative and cleverly articulated content. Public Secret, his 8th studio effort, stays true to form and is destined to defy and redefine reggae dub poetry.

Exhibiting profound lyrical mastery, along with his integration of social-political issues facing mankind, Afari’s works are thought provoking and audibly pleasing. His poetic justice continues with Public Secret, which exemplifies Afari’s intelligence and firm stance at the helm of the dub poetry genre. The album offers 15 tracks, all written by Afari, and sees 10 original selections along with five (5) dub versions of selected songs. Penning prolific poems on singles such as ‘Wine Pon Paper,’ ‘Poetree Caan Nyam,’ ‘Do Good,’ ‘Ring Pon Comedy’ and ‘Guidance,’ Afari seamlessly blends his provocative, educational missives with one-drop reggae and other rhythms, giving longtime and new fans a collector’s item.

“In preparing Public Secret, my goal was to create original, inspirational, uplifting and empowering music of peace, love, hope and unity, which is relevant and accessible to all humanity, ” states Afari. “I hope to touch people’s lives and souls in a personal and profound way, so that together we can move onward and upward in bringing awareness into the public space, and love and harmony into the secret, sacred space of our individual and collective souls.” Yasus Afari is respected in the reggae world as one of the best edutainers, whose wit and insights skillfully merge serious messages with Jamaica’s trademark sense of humor, resulting in laughter, learning and love. Now with a career spanning nearly three decades, eight albums under his belt, and two books (with a third in the works), Afari has rightfully earned international fame and acclaim as the ultimate dub poet.

Public Secret is distributed by FOX FUSE and is now available digitally worldwide from all major digital retailers. Physical albums can be purchased from the Fox Fuse Shop