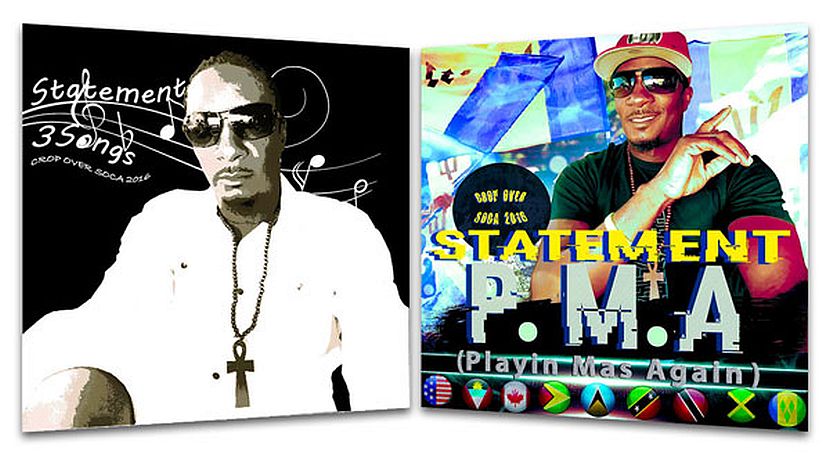 Statement brings his full catalog of hits to the global masses, after inking an exclusive catalog deal with FOX FUSE – the world’s largest music label for soca and chutney music. Born Nigel Theophilus Barnett in Bridgetown, Barbados, Statement evolved into a singer and songwriter in 2002 and has been sowing Caribbean sounds to fans around the world, ever since. “I love singing and I also have a very big passion for soca music,” says Statement. “I also used to write and perform reggae music, but I really got my recognition from soca music.” Such recognition has taken him to stages beyond Barbados, and has also catapulted him as an opening act for the likes of global pop icon and fellow Barbadian Rihanna, and R&B star Ne-Yo, to name a few.

Already massive fan favorites, “P.M.A. (Playin Mas Again)” and “3 Songs” were released for the 2016 Crop Over season – Barbados’ annual carnival celebration that is currently underway. The tunes earn him even more acclaim as both songs are currently charting in the top 10 on the iTunes Barbados Reggae Top Songs chart. “Words cannot begin to truly express the joy I feel knowing that I have not only one but both of my 2016 tracks, charting in the top 10 on the iTunes chart in Barbados,” Statement reveals.

“P.M.A. (Playin Mas Again)” was produced by Hardware Muzyk and delivers a new carnival anthem for the masses, as it encourages revelers to play mas – the French-inherited tradition of dressing up in masquerade, while partying and parading on the streets during carnival festivities. “3 Songs” brings more romantic vibes for fetes and dance floors, and is the perfect soundtrack for wining; it was produced by De Men Musiq. Both up-tempo, groovy gems were penned by Statement, who says his music is based on his real life experiences and comes from his heart. “‘P.M.A. (Playin Mas Again)’ and ‘3 Songs’ were both created with a positive attitude,” reveals Statement. “Without hard work, the strive for success is never accomplished, and with team work and collaboration, great results are achieved. Cheers to FOX FUSE for taking me to another level globally, to showcase my art.”

“We are excited to be working with Statement, as his talent and our targeted marketing efforts will surely make his music spread internationally,” states Zack Cohen, CEO of FOX FUSE. “Statement is a great ambassador for soca music not only because of his incredible talent and catalog of hits, but his enthusiasm is contagious and we are positive once his music reaches fans, they will become lifelong ones,” adds Rhona Fox, co-owner of FOX FUSE. With new hits in hand and a successful season at home underway, the timing could not be more perfect for Statement to make a musical statement, at home and beyond.

“P.M.A. (Playin Mas Again)” and “3 Songs,” both available worldwide from all major digital retailers on June 17, 2016, with pre-order available now, from FOX FUSE.