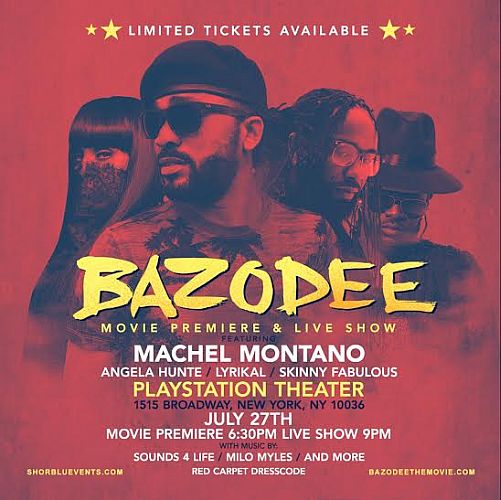 The bright lights of the Big Apple will provide the breath-taking backdrop as Caribbean music megastar and undisputed Soca King Machel Montano makes his US big screen debut at the premiere event for the new movie “Bazodee” on Wednesday July 27th 2016.

The highly anticipated major motion picture screening event will take place at the deluxe midtown Manhattan hotspot, The PlayStation Theater. This chic affair will be attended by notable personalities in music, entertainment and media and will feature a live performance segment by Montano himself alongside some of the biggest names in Soca music today.

Bazodee was written by Claire Ince and directed by Todd Kessler and is the collaborative effort of Serafini Pictures, Monk Pictures and Indiepelago Films.

In addition to Montano, the film stars theatre and television actress Natalie Perera, Staz Nair (Game of Thrones, The Rocky Horror Picture Show) and Kabir Bedi (Octopussy, The Bold and the Beautiful).

The Bollywood-style Caribbean musical which is set in the beautiful Carnival capital of Trinidad and Tobago follows a storyline of passion, sincerity and honesty in situations of love set to the soundtrack of Soca music.

The film follows Anita Panchouri (Perera), the dutiful Indian daughter of a deep in debt businessman (Bedi) who is about to marry a wealthy Londoner (Nair) when a chance encounter with a local singer, Lee de Leon (Montano) sets things askew.

In search of a muse, de Leon agrees to perform at the engagement party for both families.

Unable to deny their mutual attraction, and with the excitement of Carnival approaching, Anita must now choose between the answer to her family’s financial prayers and the possibility of real love.

At the upcoming Bazodee premiere, patrons will not only be able to experience Montano’s film debut but will also enjoy top notch live entertainment as the 2016 T&T Road March winner will take to the stage for an exclusive post-premiere performance.

Much like Montano, the principals at ShorBlu are devoted to the worldwide upliftment and development of Caribbean culture.
They shared, “We are honored that we could be able to facilitate such a monumental moment in Caribbean history. This is an unprecedented opportunity that allows us to showcase not only our native music (Soca) but the rich talent that abounds in our great twin island of Trinidad & Tobago”.

Experience the glitz, glamour and excitement of the New York City premiere of “Bazodee” on Wednesday 27th July 2016 at the renowned Playstation Theatre (1515 Broadway, Manhattan, New York) on the door step of the world’s most visited tourist attraction, Times Square, with the Movie Premiere at 6:30pm and Live Show at 9pm.