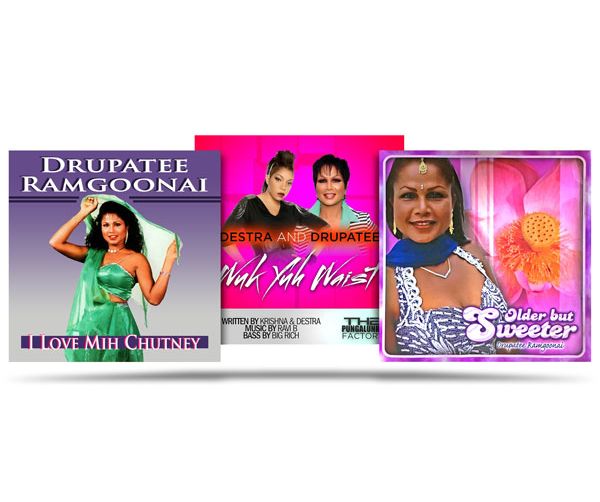 Drupatee, brings her full catalog of hits to the global masses

The Queen of Chutney Drupatee Ramgoonai, known to fans simply as Drupatee, brings her full catalog of hits to the global masses, after inking an exclusive catalog deal with FOX FUSE – the world’s largest digital music label for soca and chutney music. Born and based in Penal, Trinidad, Drupatee is a global icon for chutney music – the Indo-Caribbean fusion genre that blends Caribbean soca sounds with East Indian instrumentation and lyrics, which is native to Trinidad and Tobago. An international ambassador for the niche genre of chutney (and its crossover off-shoot chutney soca) since breaking into the scene in 1987 with blockbuster genre-bending gems such as “Chutney Soca” and “Mr. Bissessar (Roll Up De Tassa),” Drupatee has amassed a treasure trove of hits and a legion of loyal fans, globally. Known for her spicy performances and provocative dances, she is known for crushing ceilings and breaking barriers for race, gender and genre. She created history as being the first East Indian woman to sing calypso and soca music, and her unparalleled contributions have brought international acclaim and ears to the niche chutney genre. In keeping with her pioneering role, this phenom now undertakes another first by seeing the release of her full catalog digitally, and thus, making her music truly available to fans everywhere.

This is just more proof of Drupatee’s instrumental role in spreading chutney music to all corners of the globe, as fans from Asia to Africa and Europe to the Middle East will now have access to her songs and to the chutney genre, overall. “You no longer need to find a retail store and look for a rare, limited or pirated CD, which is usually what chutney music fans often rely on to get their music fix,” reveals Zack Cohen, CEO of FOX FUSE. “FOX FUSE is determined to bring the chutney genre to your fingertips – anyone with a mobile phone or computer access, and who better to undertake this process with than this living legend herself, Drupatee.” This digital push for chutney by FOX FUSE further allows its chutney clients to get paid directly for the sales of their music, which is also uncommon in the genre. Most chutney fans rely on pirated or bootlegged CDs and illegal music downloads and streams, as legitimate channels to easily access the music were not always available to chutney producers and artists. FOX FUSE is changing the business model so chutney musicians can reap the rewards of their work, and it is a vision that Drupatee shares.

“I’m honored and excited to continue spreading chutney music to all corners of the world,” states Drupatee. “Every time I travel and perform for fans, whether it is in the Caribbean or Canada or India or England, people are always asking where they can find my music and now I can tell them it is everywhere! You don’t need to leave your home, just simply go to iTunes or Google Play or Amazon or Spotify – whatever digital store you prefer, you will find me there.” Through her distribution deal with FOX FUSE, Drupatee will now even get paid for each view of her music videos on YouTube, whether it is an official music video, or just an audio-only or lyric video posted by fans.

FOX FUSE begins the release of Drupatee’s catalog with the digital versions of two early albums – I Love Mih Chutney and Older But Sweeter, along with her latest hit track “Wuk Yuh Waist,” all now available worldwide from all major digital retailers, from FOX FUSE. I Love Mih Chutney, originally released on CD in 1996 and released digitally on May 13, 2016, features 10 groovy and spicy chutney soca selections. Older But Sweeter, originally released on CD in 2007 and released digitally on May 13, 2016, presents nine romantic and sentimental Bollywood cover songs. Her latest hit “Wuk Yuh Waist,” featuring soca’s Queen of Bacchanal Destra Garcia, was Drupatee’s effort for the 2016 Trinidad Carnival season and the 2016 Chutney Soca Monarch competition; it was released digitally on February 12, 2016, during Trinidad Carnival. FOX FUSE also has other recent hits from Drupatee now available digitally, including the monster jam “Indian Gyal” featuring King of Soca Machel Montano. Drupatee’s entire catalog will be available digitally worldwide, within the coming months.

“What Drupatee is doing with her music is truly groundbreaking, in terms of making it available in the digital space to the global audience, which has never been done before by an artist of her repertoire in chutney music,” discloses Rhona Fox, founder of FOX FUSE. “She is one of the only artists in this genre, past or present, who fully owns her vast musical catalog, so that definitely made it easier for us to work with her catalog and now bring it to the worldwide audience. I was personally raised on her music so this is indeed a thrill for us to join her on such a prolific journey.”