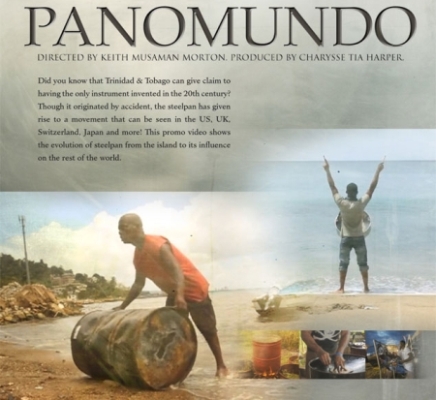 Panomundo -The International Steelband Culture – The extended promo of The film is live.

After filming the steelband culture in five countries over the course of six weeks, the filmmakers of Panomundo have released the promotional trailer on YouTube. The duo have relied on social media to highlight their efforts in covering the global steelband community over the past year and continue this strategy as they raise funds to travel to the last country – Nigeria – in November.

Panomundo: The Extended Promo is a 10-minute video explaining the history of the steelpan and its influence in the United States, Japan and Canada. It is a revised version of Panomundo the Promo, which only displayed the history of the steelpan in Trinidad & Tobago. Filmmakers Keith Musaman Morton and Charysse Tia Harper released the video on YouTube on Tuesday, Oct. 8, 2013.

“It’s exciting that we’ve made it this far!” exclaims Harper, the Trinidadian-American co-director/producer of Panomundo. “When Keith told me his idea in September 2011, I knew it wasn’t going to be easy, but I knew it was not impossible.”

Panomundo, a documentary about the history of the steelband and its influence around the world, began production in Trinidad & Tobago in January 2012.

Since then, the team has hosted over 20 fundraisers, promotional events and guest lectures in four countries using traffic generated from Facebook, Twitter, YouTube and Seed&Spark, a crowdfunding site dedicated to obtaining online support for filmmakers. On Friday, Oct. 25th, 2013, the filmmakers will promote Panomundo during California State University in Long Beach’s World Percussion Group concert at 8PM. The CSULB Steel Drum Orchestra will perform, which will be included as part of Panomundo, showcasing steelband in the education system.

“Social media has really helped us get the word out there,” explains British co-director Morton. “I’m in London and Charysse is in Los Angeles. There is no way we could have informed the entire world what we are doing without some help.”