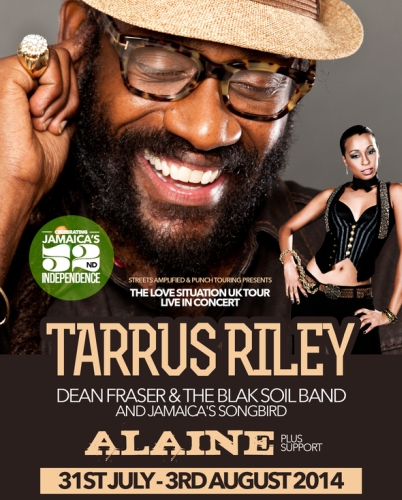 The star, whose “Love Situation” album topped the Billboard reggae chart worldwide recently will be performing at the following dates –

Tarrus will be backed by the legendary saxophonist Dean Fraser and The Blak Soil Band.

With a history which spans over a decade and some notable hits including ‘She’s Royal”, “Gimme Likkle One Drop”, “Good Girl Gone Bad” and “My Day”, his UK fans should be in for a treat!

Supported by Jamaica’s songbird, Alaine, who has showcased her skills as a performer and songwriter over a number of years. Hits such as “No Ordinary Love” & “Wine” and performances in notable shows such as Reggae Sumfest has seen her receive international acclaim.

PS, MORE ARTIST’S TO BE ANNOUNCE ON LINE UP !