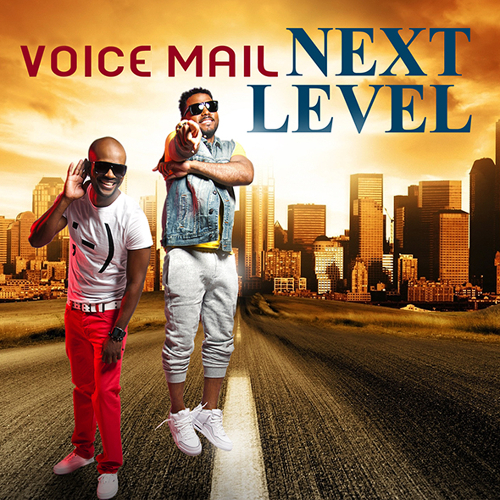 The Jamaican Duo “Voice Mail” has released a new album on Jan. 5th. Voice Mail is known for harmony-loaded vocals, to spread excitement for dancing and for a focus on the good things in life! The album is entitled “Next Level” and features 14 tracks of which 3 had been previously released.

“For this record, we’ve decided to explore untapped territories,” said Craig Jackson of Voice Mail. “We wanted to do something different, something with influences from other countries and musical styles. That’s why we partnered with two overseas producers: Dave Edwards from Brooklyn, New York and The Titans from Stuttgart, Germany. There were no limitations as to what music genre to go with. We just went into the studio and experimented with different instrumentals to see where our creativity flowed. It was a very intuitive production process. I think the result can hardly be described in terms of a genre. I urge you to listen to the songs and tell us what you think it is?”

“The production process for ‘Next Level’ was in a sense unique. We’ve tried to identify ‘white space opportunities’ between popular songs that exist today in order to drive innovation for tomorrow. Our approach to enable innovation & invention was based on giving both producers and artists creative freedom within the production process,” said Michael Freudenberger, CEO Captivate Music.

“Voice Mail frequently flew to New York or Germany and usually we spent a week in the studio, recording one song a day, every day. For those recordings we used random instrumentals from the Internet. Later, the producers screened the vocals to decide on which song they want to work. Once they were finished with a first mix that sometimes only featured a hook or verses, Voice Mail went back to the studio (in Jamaica) to record more material. The forth and back continued as long as it was necessary to get everyone satisfied. The end results were later mastered at Sterling Sound in NYC.”

“Next Level” stands for a reinvention of not only our music but also our image. Reinvention is crucial to capture people’s attention and have them remain interested,” said

Kevin Blair of Voice Mail. “Our broader focus is more towards that than to fulfill every expectation of people that are familiar with the band. Since we lost one of our members, we’ve had to reposition “Voice Mail”. Our audience today is loyal but also in constant flux and that’s not necessarily a bad thing. I think there are two categories of fans we can attract with this album.

“Over the past couple of years, pop and EDM music has become extremely popular in Jamaica. At many Jamaican parties today, DJs play a mix between music from local artists and that of global artists (such as Rihanna, Nicki Minaj or Flo Rida). Our intention here is to unite both worlds, the local with the global. I think Jamaica is ready for an act that bridges the gap.

“On the other hand, we see artists in the U.S. using Dancehall elements in their music. Every time I hear that I ask myself, why is Jamaica not delivering that music to international consumers? There are endless talents in Jamaica and there is the demand from international audiences for Dancehall drums, vocals etc. So our secondary target group are those fans.

The album is a joint venture between Scikron Entertainment Group, Captivate Music and The Royalty Network, Inc.