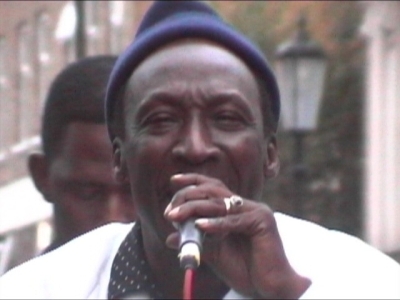 Alton Ellis, born in Kingston Jamaica in 1938, was a rocksteady legend who came to prominence in the late 1960’s, with his unique smooth and soulful style. His career in entertainment began as a dancer at the age of sixteen, then he moved into music as part of a vocal duo named ‘Alton and Eddy’. Their first recording on the Coxsone label, ‘Muriel’, was a major hit in Jamaican recording history.

Alton went on to form the band ‘Alton and The Flames’. They recorded a number songs on the Treasure Isle label, including ‘Dance Crashers’, Girl I’ve got a Date’, ‘Rock Steady’ and ‘Black Mans Pride’, which all became huge rocksteady hits throughout the 1960’s.

After three years with ‘Alton and The Flames’, he launched his career as a solo artist and joined the ‘Studio One Label’ in 1967. ‘I’m Still in Love with you’, ‘Breaking Up’ and ‘I’m Just a Guy’ are just a few of his many hits during this time.

His first album ‘Sings Rock and Soul’, released on the Studio One label was a massive hit, and remains a classic album. Alton left Jamaica in 1969 to tour Toronto, Canada, with his reggae singer sister Hortense Ellis. In 1974 Ellis moved to England in 1974, and continued to play an active role on the reggae scene.

Alton has worked with significant artists in Reggae, and is well respected by all who knew him. Alton has performed in venues all over Europe, the US, Canada and the Caribbean.

Alton received awards in recognition of his outstanding achievements as an artist and his contribution to the Reggae Music Industry from the following: The Jamaican cultural Development Commission, British Music Industry, Black Echoes, The Voice, Reggae Hall of Fame and KGFJ (Los Angeles radio station).

Alton Ellis was sadly admitted to hospital in London in December 2007 for treatment of cancer of the lymph glands and passed away in October 2008.