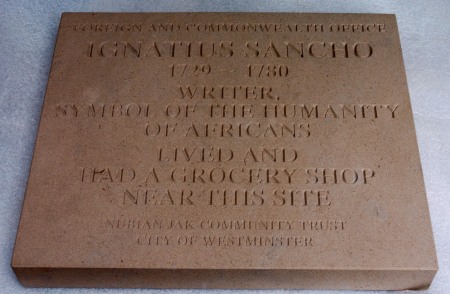 As part of its Bicentennial commemorations, Nubian Jak Community Trust has created two tributes and sites to support its ongoing heritage collection. The plaque unveilings will be held in separate London locations — the first being IGNATIUS SANCHO on Tuesday 23rd October followed by MARY PRINCE on Friday 26th October (full details for both provided below).

The organisation’s interest in heritage plaque schemes started back in 2004. Nubian Jak supported the work behind the plaques honouring Mary Seacole and C.L.R. James, as well as unveiling its first plaque — the internationally acclaimed Bob Marley tribute located in Camden which is also featured in a documentary by BBC Arena. A second Bicentennial plaque, honouring the unknown slaves of Luton & Bedfordshire on 25th March 2007 is on display in the town centre.

Jak Beula Dodd, Chair of Nubian Jak Community Trust and founder of its Heritage Plaque Scheme comments: “To be able to place the first black plaque in Whitehall in honour of the great contribution of Ignatius Sancho makes us feel immensely proud. The Mary Prince plaque, to an unsung heroine for the abolition movement, is equally as important and both will take their place in the history of Britain’s important buildings of interest.”

Ignatius Sancho Background:
“Am I not a man and a brother”

Born on a slave ship in 1729, Ignatius Sancho lived to become a famous composer, actor, and writer. He is the first known African-Briton to vote in a British election. He gained fame in his time as “the extraordinary Negro,” and to 18th century British abolitionists he became a symbol of the humanity of Africans and immorality of the slave trade. The “Letters of the Late Ignatius Sancho,” an African, edited and published two years after his death, is one of the earliest accounts of African slavery in English that was written by a former slave.

Sancho also worked as the valet to the Duke of Montagu’s wife and in 1768 his portrait was painted by Thomas Gainsborough. Sancho and his wife set up a grocery shop in Westminster in early 1774. Next Tuesday, at a site in Whitehall established as the former home of the18th century civil rights colossus a ground-breaking unveiling will take place. His home is now the Foreign Office and the event will be held in the presence of The Rt Honourable David Milliband, the Foreign Secretary, and other invited guests.

This plaque has been organised by Nubian Jak in collaboration with Westminster Council. Mary Prince Background:
‘Am I not a woman and a sister’

19th Century author and abolitionist, Mary Prince, lived in a house at 4 Keppel Street, Russell Square. The exact point where her house stood is now the site of the University of London’s Senate House.

Mary Prince was the first African woman to publish her memoirs during slavery and the book went some way towards highlighting the horrors of Transatlantic slave trade.

The unveiling will performed by Jak Beula (Chair of Nubian Jak), Dawn Somper (Mayor of Camden) and Diane Abbott MP. She will become only the second African Caribbean woman to be honoured with a major plaque (Mary Seacole being the first).

The event will also include an exhibition on Mary Prince from a number of London Schools as well as a performance by the English Touring Opera from their new work ‘Bridgetower’ which includes scenes depicting the life of Mary Prince.

This plaque has been organised by Nubian Jak in collaboration with Camden Council and University of London. It is also supported by the Local Network Fund