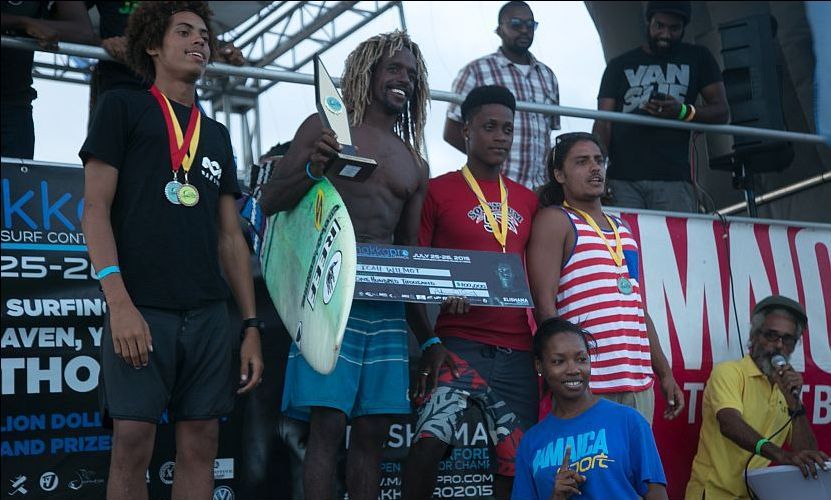 The Jamaica Surfing Association (JSA) as begun preparations for the 10th staging of its annual world famous “Makka Pro”. Attracting over 20,000 patrons over the two day event, the Makka Pro surf contest has established and maintained its status as the largest in the entire English speaking Caribbean and this year the organizers plan to make it even bigger! Plans to make the event bigger include a skateboard competition which will run in the evenings after each day of surfing. The usual concessions and attractions will be in place for patrons including the “kiddies Fun Park” with water slides, Bounce-a-bouts, Merry-go-round and Ferris wheel with a Live Show for the finale.

Jamaican surfers made a clean sweep of the top spots last year, but the 2016 competition will be a much hotter affair. The number of overseas participants increases every year and with a significantly bigger Prize Purse for 2016, international pro surfers with their eyes on cash are lining up to register. Apart from the usual “suspects” from USA and the Caribbean, much interest is being shown by surfers from central and South America. Chile in particular has a list of over 50 surfers already expressing interest to attend including top international pro Ramon Navarro, brand ambassador for the surf company “Patagonia”. The amplified interest now has organizers looking to add three additional days of competition to get through the increased number of elimination heats that will result from increased entries.

“The vision for Makka Pro is to have it grow into a 10 day, international, surf, skate, music, culture and environment festival attracting worldwide attention and forming the focal point for the growth of a meaningful alternate tourism product for eastern coastal communities specifically in the Parishes of Saint Thomas and Portland. The 10th anniversary of the event provides us with the opportunity to take the production up a notch and move us one step closer towards that ultimate goal” said the President.

“This year we are under a lot of pressure to handle all the work surrounding the 10th Anniversary” said JSA President Billy Wilmot. “Over the years we have found it difficult to woo corporate Jamaica to the sponsorship table. Unfortunately, surfing is not widely practiced in Jamaica and the number of persons involved in the sport is relatively small. The challenge is to encourage local businesses to capitalize on the positive image of the fit, talented, healthy, environmentally aware Jamaicans, involved in an exciting and visually appealing alternate aquatic sport. How do we create an attractive sponsorship package which offers the opportunity for companies to access this very marketable image and provide an open gateway to the gigantic international surf market?

The international surf industry has embraced Jamaica’s budding surf culture and now, the island’s world renowned culture, music and epic surf has attracted support from top international pro surfers, the Gadauskas Brothers and their “Positive Vibe Warriors” who are currently on a surfboard drive to raise equipment for Jamaica’s surfers

“This is a major step for Jamaica” said JSA President and Jamnesia owner Anthony Wilmot. “The Gadauskas Brothers, Pat, Dane and Tanner, are well known and respected members of the international pro surfing community. Their endorsement of Jamaica’s surf, Jamnesia and the JSA will go a far way in attracting support and promoting surfing locally and Jamaica’s involvement in the sport internationally. Most of all, the professional standard boards will arrive in a very timely manner for our top surfers as they prepare to defend against all comers at the 2016 MAKKA PRO!”