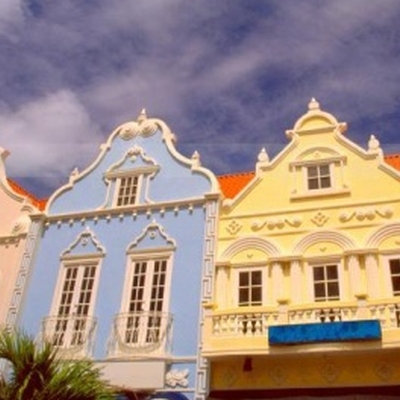 Bonbini, in our native language of Papiamento, means “Welcome”. Welcome to Aruba. The word is ours. But we like to think the meaning is universal.

Bonbini Aruba
Our beaches curve like an Aruban smile along the western shores, soft and white and fringed with palm trees, sloping gently toward the calm transparent turquoise of the Caribbean.

Between the two extremes, in a desert landscape where the cacti grow to the height of a man, great building-sized tumbles of boulders stand like the lagacy of some ancient, angry god. Winding roads lead to rocky passes and hidden coves, or sometimes to nowhere at all. Giant green parakeets call to their mates, and troupials flash brilliant orange against the deep blue of the Caribbean sky.

This is not the Caribbean as usual. This is Aruba! And if its true that opposites attract, then this could well be the most attractive island of them all.

The fact is, if you’re looking for it, and if it has anything to do with a great Caribbean getaway, you can probably find it here in Aruba.

As you explore, as you get to know Aruba, you’ll soon begin to notice the smiling faces everywhere. Real smiles. Gracious smiles. Sheer-joy-of-living smiles. Aruba, as any traveler here will tell you, must surely be among the most welcoming places on Earth.

Maybe its the Dutch tradition of hospitality. Maybe its the long and prosperous history of the island. Maybe its the year-round warmth of the sunshine and the fresh breezes of the tradewinds. More than likely, its all those things and more. But whatever it is, its absolutely true: Aruba is a genuinely happy place to be. And the people who live here, in the cities, in the villages, in the countryside, are genuinely happy to be sharing it with you.

So, sit back, relax and explore our website, where you will find many things to do, places to go and things to see, as well as important information to help you plan your visit to Aruba, “One Happy Island”.

There is no wrong time to visit Aruba. Temperatures are consistently mild, there is no major rainy season, the island lies completely outside the hurricane belt, and the ocean temperature hovers around 82 all year long.

January, February and March are the most popular times to visit. During Carnival, just before Lent, the island is hopping with parades, festivities and parties. If you prefer smaller crowds and a more relaxed atmosphere, plan your trip for mid-April through September. Or, if you can’t stand another morning of scraping ice from your windshield, hop the next plane and come in the middle of December.

For the most part, casual, informal summer clothing is the rule in Aruba. Women may want to bring along a scarf or hat; the constant trade wind, while refreshing, is not compatible with a carefully arranged hair style.

The days of formal dress at shows, casinos and restaurants is gone, but if you plan to visit some of the island’s elegant restaurants, night clubs or casinos, one or two dressier outfits would be appropriate. Jackets and ties for men are not required except at a very few restaurants. As for bathing suits, please remember that they’re acceptable only on the beach, and not on the streets.

The official currency of Aruba is the Aruban florin, which is divided into 100 cents. Silver coins are in denominations of 5, 10, 25 and 50 cents, one florin, 2 1/2 florins and 5 florins. The 50-cent “yotin” coin, which is square, is probably Aruba’s best-known coin.

The florin fluctuates with the dollar on the world market. Current exchange rates are stable at Af. 1.77 to the U.S. dollar and Af. 1.34 to the Canadian dollar. U.S. and Canadian dollars are widely accepted in Aruba, and banks may exchange other foreign currency. Please call or stop by the individual banks for further information.

Most stores and boutiques are located in Oranjestad. There are also shops at the major hotels and at the airport. Other major shopping areas are Centro Commercial, in Noord, and the San Nicolas Shopping District.

You will be pleasantly surprised to find a wide selection of hand crafted items made by native Arubans. Quite often the process of producing them is carried on right in front of your eyes, on the beachfront and at concession stands set up along the harbor.

The wharf at Oranjestad’s colorful harbor side can be a bargain hunter’s dream. Paintings, T-shirts, photographs (some of them historical), pottery and jewelry are all set up along the Boulevard. Transactions are carried out in both dollars and florins, and bargaining is expected.

Aruba is an island with historical roots in Holland. Icons such as Delft pottery, windmills and wooden shoes are blended together with handicrafts that feature colorful Cunucu houses that can be seen throughout the countryside.

Aruba isn’t actually a duty free port, however the duty is low enough that some excellent buys can be found here, especially on items such as jewelry, perfume, fashions and electronic equipment.

Citizens of the United States who have been out of the country for a minimum of 48 hours and who have not used their respective duty free allowance within 30 days are entitled to a $600.00 duty free tax exemption. Families traveling together can pool their exemptions, meaning a couple with two children can bring back $2400.00 worth of articles.

The downtown harbourfront area of Oranjestad bursts with modern colorful malls that produce a distinctive architectural trademark. The major downtown shopping centers are the The Atrium, Port of Call Marketplace, Royal Plaza, Seaport Marketplace, Seaport Village Mall and the Strada Complex I and II.

Many malls feature wide open-air concept ceilings that allow the sun to shine in. They are all brightly lit at night, giving the downtown core a glowing neon display in vivid colors. Some have first class nightly live entertainment and casinos.

There are many jewelry stores located in Oranjestad as well as in many of the major hotel lobbies. Specialties include gold, diamonds, tanzanite and many other precious stones as well as watches from many of the well known manufacturers.