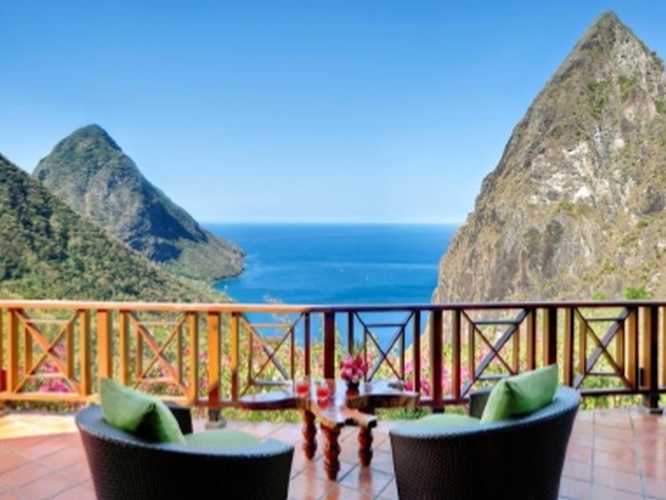 Ladera Resort has again been named one of the “Top 15 Hotels in the Caribbean” by the readers of Condé Nast Traveler in the magazine’s 2013 Readers’ Choice Awards survey results. Ladera’s impressive score placed the hotel on the coveted short list and in the highest position among the other Saint Lucian hotels on the list.

It has been a banner year for Ladera, which earlier this month was recognized on the list of “Fodor’s 100 Hotels ” in the world. Ladera was one of only three properties in Saint Lucia to make the list and the only Saint Lucian resort named in the “Exotic Hideaways ” category, an honor bestowed on destination hotels that offer a trip of a lifetime. Also this year, Ladera appeared for another consecutive year on the prestigious Travel + Leisure’s World’s Best list. All of these awards are especially gratifying in a year that saw the opening of Paradise Ridge at Ladera, the new luxury development featuring a singular Villa, four Suites offering and exclusive butler service.

“Ladera is again honored to be selected as one of the ‘Top 15 Hotels in the Caribbean’ by the readers of Condé Nast Traveler,” says Olivier Bottois, Vice President of Marketing and Operations. “Our entire team continues to strive for excellence and deserves enormous credit for delivering the most authentic Saint Lucian experience.”

A record 79,268 readers, nearly double the number from 2012, participated in the 26th annual Readers’ Choice Awards survey. They cast nearly 1.3 million votes for 16,000 plus properties and Condé Nast has announced that this is the “most comprehensive ‘best of the best’ travel awards ever. “The Readers’ Choice Awards, which also ranked the island of Saint Lucia 5th among Top Islands in the Caribbean and the Atlantic, are featured in the November 2013 issue of Condé Nast Traveler.

Ladera is the only resort on Saint Lucia overlooking the Pitons, a UNESCO World Heritage Site. The eco-luxe resort is on a forested ridge 1,100 feet above the Caribbean, perched above the port town of Soufrière. Ladera was ranked among the top 15 hotels in the Caribbean in Travel + Leisure’s World’s Best Awards 2013. Over two decades ago, Ladera pioneered the concept of the open-air, three-walled guest suite that remains its signature design. The only authentic Saint Lucian resort, Ladera prides itself on its handcrafted furniture made by local artisans.

A fixture on every major top hotel and awards list, Ladera is a haven for celebrities, honeymooners and trendsetters. Dasheene at Ladera is known for its new approach to fresh cuisine and creative renderings of locally sourced Saint Lucian seafood and produce, as well as its breathtaking views of the Pitons.

For reservations and information on Ladera Resort and Dasheene at Ladera Resort, please visit www.ladera.com, or call the hotel directly at (758) 459-6600.