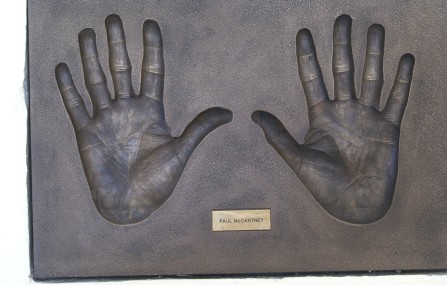 Sir Paul McCartney, Elton John and Mark Knopfler are amongst the music industry legends who have had their hands cast in bronze for a new ‘Wall of Fame’ exhibit on the Caribbean island of Montserrat.

The bronze hand-prints, displayed on the wall of the Montserrat Cultural Centre, represent the ‘helping hand’ the artistes provided to the island by performing in the Music for Montserrat concert at the Royal Albert Hall on September 15, 1997. The fundraising concert was organised by legendary Beatles’ producer Sir George Martin, whose connections with Montserrat date back over 30 years. Sir George’s hand-prints also appear on the wall, with percussionist Ray Cooper’s hands completing the current line up.

“Displaying these bronzed hand plaques demonstrates our continued commitment to the development of the arts in Montserrat,” said Sir George Martin, patron of the Cultural Centre and long-time winter resident of Montserrat. “This is a lasting tribute to the artists who performed at the Royal Albert Hall, without whose selfless contribution the Centre would not have been built.”

It is hoped that the Wall of Fame will soon be extended to include the handprints of other artistes who performed at the Music for Montserrat concert. These include Jimmy Buffet, Eric Clapton, Phil Collins, Sting, Jools Holland, Midge Ure and Montserrat’s own Alphonsus ‘Arrow’ Cassell – performer of Caribbean anthem ‘Hot, hot, hot’. The unveiling of the ‘Wall of Fame’ was attended by Sir Trevor MacDonald, who has been filming a documentary in Montserrat for ITV.

30 years ago, in 1979, the opening of Sir George Martin’s AIR Studios Montserrat saw the tiny Caribbean island gain international recognition through its regular stream of rock star visitors. Sir Paul McCartney, Stevie Wonder, Sting and The Police, Dire Straits, Lou Reed, Duran Duran, Luther Vandross and James Taylor were amongst those who recorded at AIR Studios over the decade that followed. Elton John met his future wife Renata at AIR Studios, where she was a recording engineer, while Eric Clapton’s daughter Ruth was raised on the island by her mother, AIR Studios’ manager.

The recording studios were closed after being damaged by Hurricane Hugo in 1989. Six years later, Montserrat’s Soufrière Hills Volcano began erupting, leading eventually to the evacuation of the southern part of the island and the burial of its capital, Plymouth. Since that time, Sir George Martin has been raising funds to help the local population, with proceeds from the Music for Montserrat concert going towards short-term relief.

His second major initiative was to release five hundred limited edition lithographs of his score for the Beatles song ‘Yesterday’. Complete with mistakes and tea stains, the lithographs are numbered and signed by Sir George and Sir Paul McCartney. The money raised from the sale of these lithographs went towards building the Montserrat Cultural Centre, an up-to-date arts and media facility which opened on Montserrat in 2007. As Montserrat works towards the development of a new capital in the north, the Cultural Centre is already playing an important role as the island’s largest public building, hosting performances, conferences and exhibitions.