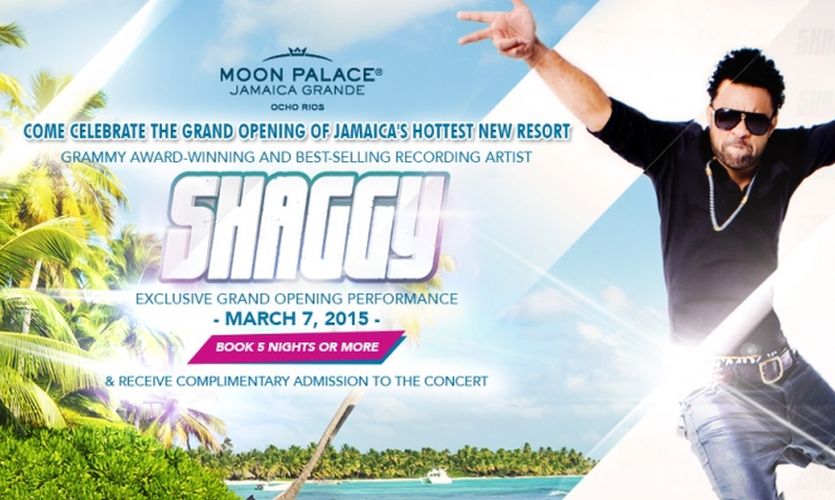 Palace Resorts, the company that sets the standard in five-star, all-inclusive resort accommodations, proudly announces Grammy-Award winning singer, philanthropist and entertainer Shaggy to appear in concert at the inaugural celebration of Moon Palace Jamaica Grande, the brand’s first property outside of Mexico, on March 7, 2015.

Palace Resorts’ first awe-Inclusive property in Jamaica is set to open on February 1, 2015. The leader in awe-inclusive vacation experiences and world-class entertainment, Palace Resorts is offering guests who book a stay of five nights or more two complimentary tickets to the performance as part of the all-inclusive concept.

Orville Richard Burrell, best known by his stage name “Shaggy” and hit singles “Angel,” and “Boombastic”, won a Grammy for his album “Boombastic,” and earned nominations for the reggae fusion hits “It Wasn’t Me,” “Clothes Drop,” “Intoxication” and “Hotshot.” Shaggy received Billboard’s Male Artist of the Year and Male Album Artist of the Year and was nominated by the American Music Awards as the Favorite Male Pop/Rock Artist, Rap/Hip-Hop Artist and International Artist of the year.

“Moon Palace Jamaica Grande marks the next chapter in the brand’s 30 year history. It is our hope that our first property outside of Mexico will capture the attention of new and past guests alike by coupling the appeal of Moon Palace’s stellar entertainment offerings with Jamaica’s vibrant allure to create an unrivaled destination resort. We can’t think of a better way to celebrate the newest property in Palace Resorts’ growing portfolio than with an electrifying performance from Shaggy,” said Gibran Chapur, Executive Vice President of Palace Resorts

“With now eight diverse award-winning properties located throughout Mexico and now Jamaica, the Palace Resorts team has always taken great pride in continually redefining what an all-inclusive resort can and should offer valued guests via unmatched amenities, the highest standards in service and the distinct ability to provide the backdrop for unforgettable experiences. By offering on-property concerts as part of our all-inclusive concept from leading artists including: Usher, Shakira, Ricky Martin and Enrique Iglesias among others, the Moon Palace brand has become synonymous with world-class entertainment. It is our goal to bring that same world-class entertainment to Jamaica.”

With over 20 million albums sold to date and seven number one albums, Shaggy continues to thrive with his music, as evident by his most recent Best International Performance nomination for the 2014 Soul Train Awards for the single “You Girl feat. R&B superstar Neyo and Best Reggae Album Grammy Nomination for “Out of Many, One Music”, Shaggy is definitely a major contender in music today.

Also a philanthropist, Shaggy is known for his major contribution and time he puts into “The Shaggy Make a Difference Foundation,” which has raised over two million dollars for the Bustamante Children’s Hospital, through his fundraising event, “Shaggy & Friends” Benefit Concert.

Shaggy is currently receiving huge mainstream buzz around his recent release ‘I Need Your Love’ featuring Mohombi, Faydee and Costi. The single has garnered over 11 million YouTube views and scorching the charts globally.