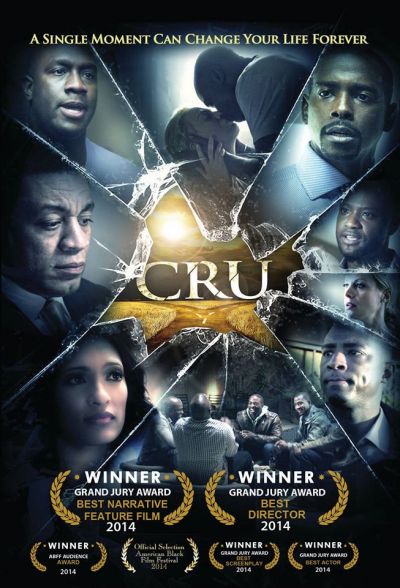 When Director Alton Glass and novel screenwriter Oliver W. Ottley, III came together to write CRU, they were determined to tackle several taboo issues with in relationships but they couldn’t have anticipated just how much of an impact the film would have on its audiences. Film festival judges and attendees were moved by the familiar but emotionally charged topics of interracial relationships, infertility, parent-less homes, “baby mommas” and infidelity.

The blunt treatment of these issues combined with lessons in forgiveness, generosity and friendship helped land CRU firmly in the winner’s circle and left most viewers teary-eyed.

This award-winning drama tells the story of four high school best friends whose lives are dramatically changed after a near fatal accident. When they reunite 18 years later, they discover a set of past and present secrets that threaten to alter the course of their future.

You cannot have a great movie without great music and CRU didn’t fall short in this regard. Many people that know Keith Robinson as an actor don’t realize he was a singer first. Keith performed “Looks Like We’ve Made It” , on CRU’s soundtrack and the song appropriately seemed to bring the entire production full-circle.

The team at Glassrock Entertainment has its sights on the Cannes Film Festival and the Berlin International Film Festival to name a few, but first, CRU plans on touring the U.S. Virgin Islands to premiere the film on St. Thomas, St. John and St. Croix. The tour will be somewhat of a home coming for some of the team given that Oliver grew up in the U.S. Virgin Islands and is the son of St. Thomas – born Oliver W. Ottley, Sr. Alton , Oliver and some of the film’s actors will address high school juniors and seniors with an interest in screenwriting, acting or film production while touring the islands.

“We hope that sharing of our knowledge of the industry and our experiences can help i n spire those with a passion for the Arts no matter what the focus ,” said Ottley. “I also wanted the people at home to be a part of our success. We want to illustrate the many opportunities within filmmaking and the Arts and hopefully open minds to even greater possibilities.”

The CRU ‘crew’ will be exploring the USVI and experiencing it’s dynamic food and culture while trying not to break the internet with social media posts of all the beautiful scenery.

You can also watch and share the trailer by clicking here

For all festival goers that have screened the film, you are encouraged to leave a review on CRU’s IMDb page,