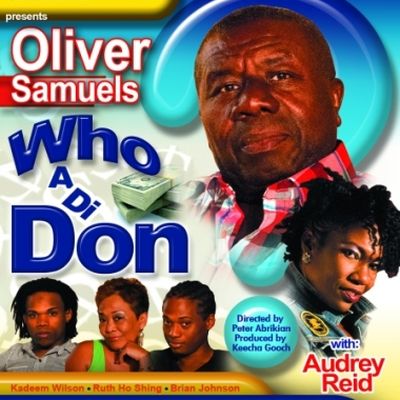 Who A Di Don in celebration of Jamaica’s 50th with two of Jamaica’s finest actors Oliver Samuels and Audrey Reid.

We knew something big was on the horizon – to celebrate Jamaica’s 50th Anniversary – when Caribbean’s king of comedy, Oliver Samuels, took the natural step to write and co-direct his first play.

Reforming his unbeatable comedy partnership with Audrey ‘Dance Hall Queen’ Reid, Who A Di Don, tackles the serious don-man-ship issues – which have affected the island over the years – and transforms them into a hilariously funny and sharply satirical comedy.

With unique one-liners that only Samuels can deliver, along with captivating high-energy performances from the ever popular Audrey Reid, Jamaica’s number one comedy ensemble is completed by Ruth Ho Shing and rising star Kadeem ‘Ghetto Life’ Wilson.