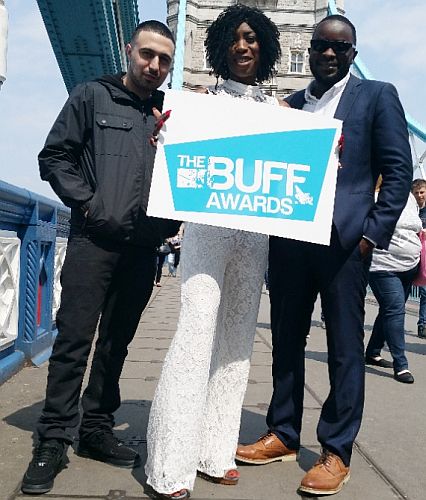 The British Urban Film Festival Awards will be broadcast in the autumn, exclusively on Sky Showcase in the UK and complimented by extended digital coverage from BUFF online.

Adam Deacon said: “I’m looking forward to being part of this year’s BUFF Awards. It’s important to support the up and coming urban British talent as they don’t always get the support that’s needed from the mainstream”.

Femi Oyeniran said: “I am delighted to be presenting this year’s BUFF Awards with my friend and long-term collaborator Adam Deacon. I hope I am able to bring wit and charisma to the evening’s proceedings”.

Organisers have also confirmed Heather Small, the former lead singer of M People, as this year’s headline act. In 2000 Small released her debut solo album Proud along with a single of the same name, closely affiliated with the British Olympics team.
Leading the way with four nominations are Second Coming and Invisible Men. Both London based movies mark the directorial debuts of Debbie Tucker Green and Meshack Enahoro respectively and were shown as part of BUFF’s coverage in 2015. Second Coming is nominated in the Best Actor, Best Actress, Best Director and Best Movie categories. Invisible Men is nominated in the Best Actor, Best Emerging Talent, Best Director and Best Movie categories.

Following closely with three nominations are: Lapse of Honour, a gritty feature length drama set in Moss Side, Manchester and the eponymous short film Beverley, set in 1980’s Leicester.

Montana, the second feature from Somali-British director Mo Ali, receives two nominations, as does For His Sake, the short film directed by British-based Frenchman Louis Lagayette.

A number of short films which screened at BUFF in 2015 have 1 nomination each: Stealing Moses; Sheila; Murder Capital; Shadows; Out and The Good Son.

BUFF has also announced that actor of stage and screen Wil Johnson will receive the Special Honorary Award at the ceremony. Johnson is being recognised for a 31 year career across a diverse range of productions on stage, on television and in the cinema including Waking The Dead, Babyfather, Emotional Backgammon, Disoriented Generation, Emmerdale and King Lear.

The winners will be announced at the ceremony on 18 September with live music from Heather Small.

The nominations for the British Urban Film Festival Awards in 2016

BEST SCRIPT TALENT: (Winners to be announced on 4 July)

The British Urban Film Festival Awards are the showpiece event in its’ annual film festival. The event honours emerging and established film and writing talent whose work is synonymous with the festival and has been showcased in recent years.

The official hashtag is #BUFFAWARDS2016.