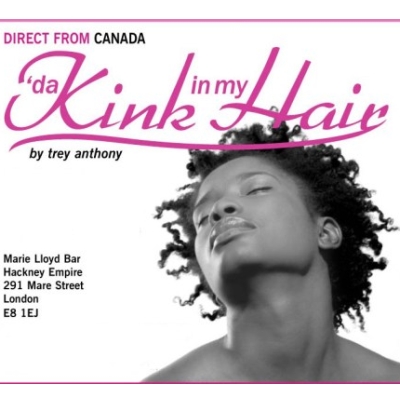 Trey Anthony’s new play about the hardships and joys of Black women set in a Toronto Beauty Salon is the ‘Steel Magnolia’ for the Noughties – Sassy, sexy, funny and intelligent.

There will be a UK / European premier at the Hackney Empire in November 2006, with a European tour following in 2007.

“If you really want to know what’s going on with a woman, especially a black woman, you have to look at her hair. ‘da KINK is ‘da bomb!” Toronto Sun

“Universal themes from sharply drawn characters the world passes on the street but rarely stops to listen to” NBC-TV, New York

“Very, very funny! Well worth a visit. I recommend it!” National Post

Set in a Caribbean hair salon in Toronto, this amazing new musical play gives voice to eight black women who tell their unforgettable stories in a kaleidoscope of drumming, singing and dancing. The Steel Magnolias for the Noughties – it is a sassy, sexy, funny and intelligent take on life and relationships that anyone can relate to.
Da Kink In My Hair has already grossed $6,000,000 in Canada and is set to make waves once it crosses the pond. The Hackney Empire run is the European premiere of this award winning and highly acclaimed show ahead of a full UK and European tour in 2007.

Trey Anthony, a Caribbean woman from Toronto, has written an extraordinary dramatic and musical testament to the challenges and triumphs in the lives of contemporary black women, many of whom are immigrants to North America from the Caribbean themselves. Mixing laughter and tears, revelation and inspiration, DA KINK is sexy and smart and sure to have you on your feet cheering! There is a message for everybody in Da Kink.

Trey Anthony was born in Hackney of Jamaican descent and left with her parents to start a new life in Canada aged 11 years of age, some 20 years ago. The rest of her family stayed in the UK and so her understanding and knowledge of the Caribbean immigrant experience is not lost to her.

She is a former television producer for The Women’s Television Network, WTN, and has written for the Comedy Network and CTV and worked on the Chris Rock Show HBO. She is also an accomplished stand-up comedian and is the Executive Producer of Canada’s first Urban Womyn’s Comedy Festival, dat girl sho is funny! She is busy working on her first screenplay, a hip hop love story and of the course the sequel to ‘da KINK in my hair.