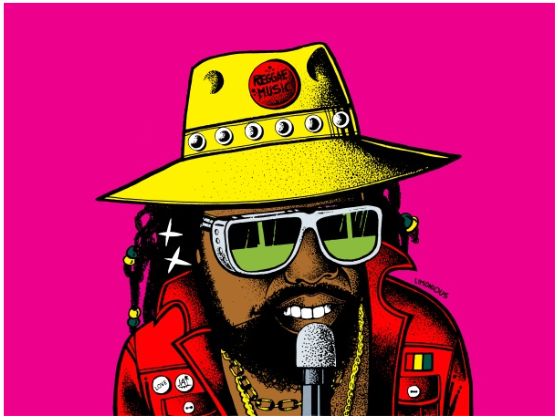 In Fine Style: The Dancehall Art of Wilfred Limonious at the South London Gallery

The South London Gallery and One Love Books present In Fine Style: The Dancehall Art of Wilfred Limonious, the first major retrospective of one of Jamaica’s most prolific graphic artists.

The exhibition includes reproductions of Wilfred Limonious’ work from the early 1970s through to the mid 1990s, spanning three key phases in his career: his newspaper comic strips, illustrations for the publications of the Jamaican Movement for the Advancement of Literacy (JAMAL), and his distinctive artwork for the burgeoning dancehall scene coming out of 1980s Jamaica.

Wilfred Limonious (1949-99) began his career producing comic strips for the Jamaican daily newspaper, The Star, with cartoon characters such as Amos and Chicken becoming particularly popular. During the 1970s he worked as in-house illustrator for Jamaica’s national literacy programme JAMAL, before going on to produce a huge body of work for the Jamaican music industry, illustrating hundreds of LP jackets and record centres for labels such as Jammy’s, Power House, Studio One, Techniques, Ujama and Midnight Rock.

Despite being widely recognised among reggae and dancehall circles, Limonious’ illustrations are relatively unknown in the wider art world. Exhibition curator, Al ‘Fingers’ Newman, describes the role that the exhibition plays in remembering Limonious’ legacy; “Wilfred Limonious is an important part of Jamaica’s cartooning tradition, and the father of what has become known as “dancehall art”. His seminal work, particularly for the island’s music industry, continues to be relevant today and deserves far wider recognition”.

In Fine Style: The Dancehall Art of Wilfred Limonious is curated by Al ‘Fingers’ Newman and Christopher Bateman and is produced by One Love Books alongside a book on Limonious’ life and work, due for release in August 2016.

Supported by Arts Council England, The Art Fund and The Elephant Trust.

Al ‘Fingers’ Newman, curator
Al ‘Fingers’ Newman is a musician, DJ and cultural historian based in London. His previous books include Clarks in Jamaica (One Love Books), Greensleeves the First 100 Covers (Stüssy Deluxe) and DPM: An Encyclopedia of Camouflage (Maharishi). His recent exhibitions include Sound System Culture: Bristol and Art in the Dancehall.
@djalfingers

Christopher Bateman, curator
Christopher Bateman is founder of the Limonious blog, In Fine Style (infinestyle.wordpress.com). He currently works as a library technician and plays bass in a country and western band in his hometown of Edmonton, Alberta, Canada. Over the past five years, Bateman and Newman have been collaborating on a book about Limonious’ life and work, due for publication in August 2016 (One Love Books).

A special event celebrating the life and work of Jamaican graphic artist Wilfred Limonious (1949–99), with Christopher Bateman and Al ‘Fingers’ Newman presenting their new book, In Fine Style: The Dancehall Art of Wilfred Limonious, and words from guest speakers Paul Gilroy (Kings College) and William ‘Lez’ Henry (What the Deejay Said, A Critique From the Street).

At 8pm there will be a break for England’s first game of the Euro 16 championship against Russia, followed by a Limonious dance from 10pm with Earth Runnings sound system playing music from the records that Limonious illustrated.