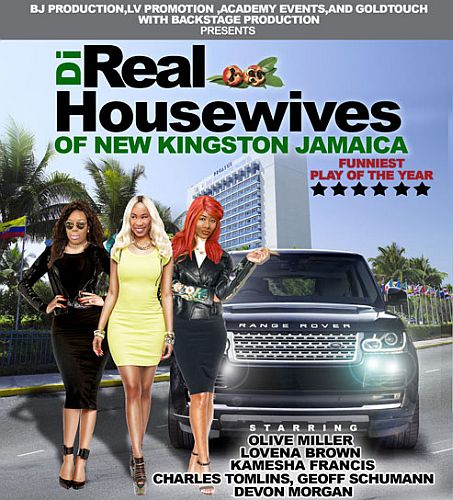 The story is based around 3 glamorous New Kingston Jamaican housewives, Puchie, Angel and Oneniesha who are formerly from the ghettos of Downtown Kingston but manages to get out of the ghetto due to their status in making money for themselves as Higglers and becoming middleclass citizens thus marrying rich high class professionals.

However, knowing that they are from the ghetto doesn’t always go down well with mixing genuinely within the high class society. So, their regular meet up sessions at the Limeskin Bar have one thing in common – their rich and successful husbands all work far away from home and sometimes out of the country. But then, when you have a drink or two or more, you tend to talk too much, speak too much, hear too much, say too much…

This is a hilarious comedy play with glamour, twist, shocks and laughter throughout which also highlights the supposedly class divisions, the nip and tuck craze and the detriment of alcoholism, through a star studded cast featuring: Charles Tomlin, Geoff Schumann, Devon Morgan, Olive Miller, Lovena Brown and the exciting new talent of Kamesha Francis.