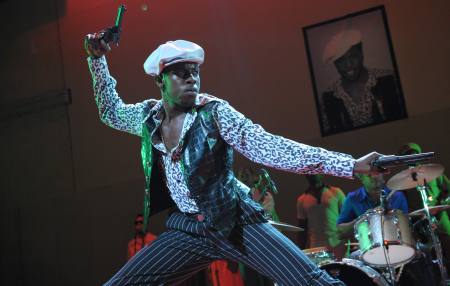 It was the 1972 movie that took reggae to the world. Now The Harder They Come is set to take Britain by storm once again, live on stage. Following a triumphant West End run and high profile performances in Toronto and Miami, a national seven-venue tour of this iconic reggae musical takes place from May to July 2010, bringing original author Perry Henzell’s quintessential tale of 70’s Jamaica to life.

Perennially topical, The Harder They Come is the acclaimed adaptation of the groundbreaking film starring Jimmy Cliff featuring his classic songs such as ‘You Can Get It If You Really Want It’, ‘Rivers of Babylon’, and the hit title track, ‘The Harder They Come’. An all time classic film soundtrack and one of reggae’s best ever selling recordings, Cliff’s songs remain as inspirational and relevant as when they were first written in the aftermath of Jamaica’s early years of Independence.

Now spectacularly staged with an acclaimed cast and full reggae band, the music comes alive in a powerful and life-affirming drama of broken dreams, wasted youth and redemption …the story of a Jamaican rebel with a cause.
The show was written by the film’s original producer /writer/ director, the late Perry Henzell and first performed by an all-Jamaican cast. Since the opening London run, it has continued to attract enthusiastic audiences through its vivid characterisation, timeless music and dramatic bite.

Says show producer Jan Ryan of UK Arts International:
“What’s really special is the total integrity with which the show has been mounted. It is the first genuine black Caribbean musical to be staged in the UK. Through Perry Henzell’s creative vision and supported by a top production team, the live show has an authenticity and truthfulness which energises audiences as much as the performers.

And though the songs were all written in the early seventies they’re still as fresh today – not just with an audience that remembers them from their youth, but with a young audience – black and white – that identifies with these timeless popular classics.”

First staged in 2006 at Theatre Royal Stratford East, The Harder They Come was revived by Stratford East in 2007, then restaged for the Barbican Theatre in 2008. This was followed by a five-month West End run at The Playhouse Theatre before transferring to the Birmingham Hippodrome (2008) and North America in 2009.
With 1970s authenticity and the resonance of a modern fable of gangs, guns and disaffected youth, ‘Harder’ has not only proved to be a successful show in its own right, but also a potent cultural expression of contemporary Britain’s ongoing issues of social exclusion, poverty and inner-city breakdown.