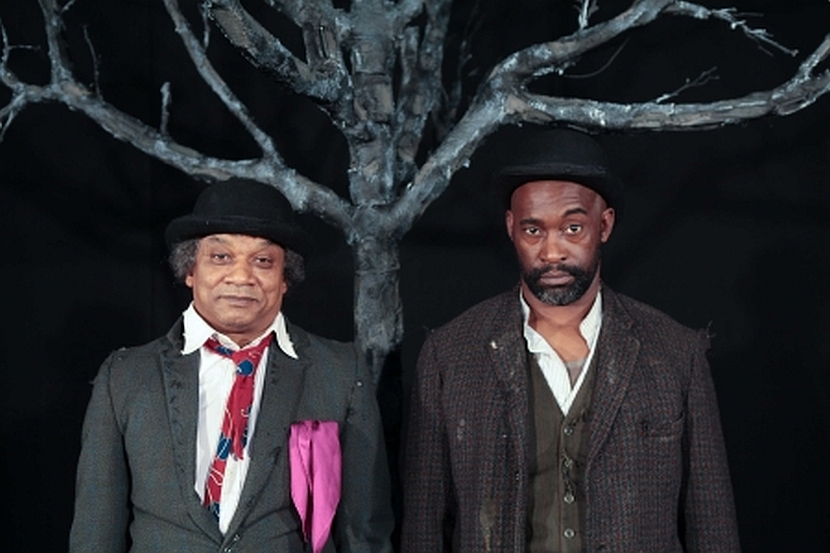 All Black British cast in Beckett’s Waiting For Godot

After a premiere at The West Yorkshire Playhouse (Friday 3 to Thursday 23 February), Samuel Beckett’s masterpiece ‘Waiting For Godot’ will tour the UK from 6 March. Co produced with Talawa Theatre Company and directed by Artistic Director Ian Brown, the production stars Jeffery Kissoon and Patrick Robinson as Vladimir and Estragon – two men waiting hopelessly, helplessly, haplessly for the elusive Godot.

This is the first ‘Waiting For Godot’ to be produced in the UK with an all-Black British cast and will visit London’s Albany Theatre, Birmingham Old Rep, Theatre Royal in Winchester and the New Wolsey Theatre in Ipswich.

Vladimir and Estragon are waiting. Two old men whose compulsion to wait for a visit from the indescribable Godot forces them to pass the time in the only way they can; with and for each other. Stories are told, boots are abandoned, religion is debated, memories of better days are shared, jokes are made, suicide is contemplated, the fear of being alone is overwhelming – and time passes. Chance meetings happen, arguments take place, thinking occurs, violence is advocated, hats are exchanged, friendship is venerated – and time passes. On a road with a single tree two old friends wait…and pass the time.

Trinidadian stage actor Jeffery Kissoon (Vladimir) works regularly with the RSC and will play Caesar in its all-black cast production of Julius Caesar this summer. He performed opposite Kim Cattrall in Antony and Cleopatra (Liverpool Everyman), and has previously played Mark Anthony in Talawa’s 1991 all-black cast production. He also worked with Talawa in its 1989 production The Gods are not to Blame.

Direct from War Horse in the West End, Patrick Robinson plays Estragon. An actor whose work spans stage and screen, Patrick has previously performed at the Playhouse, playing the lead Thomas Peters in 2007’s Rough Crossings, a powerful drama about 18th century slavery written by historian Simon Schama. His television credits include popular and long-running roles in The BILL and Casualty. Fisayo Akinada, Guy Burgess and Cornell S. John complete the ensemble.

Following on from his critically acclaimed production of King Lear with Tim Pigott-Smith, Ian Brown directs Waiting for Godot, a more intimate but no less challenging play. His recent credits for the Playhouse include As You Like It, Hay Fever for which Maggie Steed won a TMA award, When we are Married with Les Dennis, a new musical version of The Secret Garden, Steve Waters’ Fast Labour and the award-winning How Many Miles to Basra?

A novelist, playwright, poet and theatre director Beckett wrote in both English and French and penned some of the most important works of Twentieth Century literature. The mysterious and universal Waiting for Godot, which was first performed in the UK in 1955 remains one of his most famous and important works. Its true meaning is constantly debated and searched for, yet Beckett was clear in his belief that all you need to know is there in the play.
‘Waiting For Godot’ tours the UK