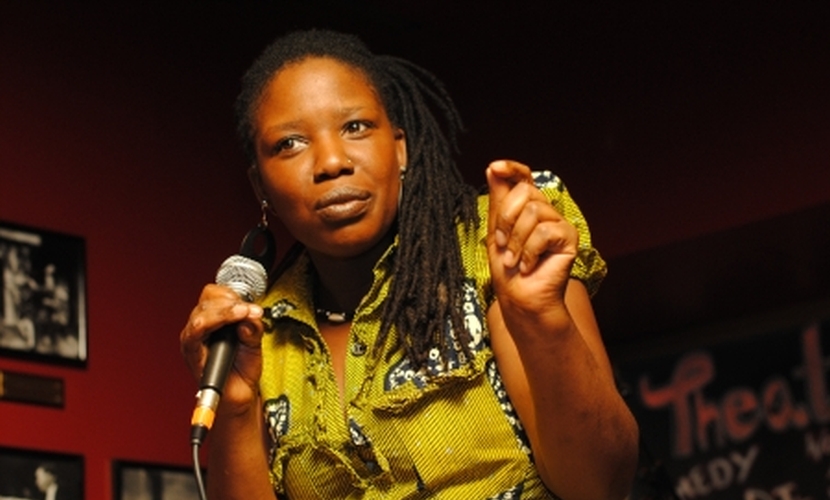 Critically acclaimed Kat Francois cites being a Comedienne, Playwright, Educator, Compere and Performance Poet amongst her arsenal of skills.

A consummate professional on the stage, Kat’s natural progression from hosting with a comedic edge, to fully-fledged stand up, appears to have been a seamless and some might say, destined route. Her first full length comedy show in 2010, Kat’s Got Your Tongue, sold out the Theatre Royal Stratford East studio space. Directed by Dawn Reid, the show’s success has secured a return to the theatres main, 450 seat auditorium for two nights, in July 2011, with a planned national tour in the pipeline.

Having won the televised, BBC3 Poetry Slam in 2004, making her the first Performance Poet to do so, before walking away with the coveted title of World Champion, after competing in the World Slam Championships in Rotterdam in 2005, it’s fair to say that Kat Francois is a stellar ambassador for Performance Poetry, both in the UK and across Europe. A regular live performer on BBC Radio, Kat’s diverse poetry, delights and ‘edutains’ a broad range of
audiences; from young people, in educational, facilitator-led settings, and television programmes Blue Peter and The Big Poetry Slam, to performance poetry, variety and comedy shows alike.

Longstanding Compere and Comedienne of live entertainment event, Word4Word at the Theatre Royal Stratford East bar, which has been running for an impressive 7 years, Kat also hosts INTIMATES at the infamous Poetry Café. Kat’s poetry has been published in a number of magazines and anthologies, and her first written collection of poetry, Rhyme & Reason, was published by Zupakat Productions in February 2008, with her works and words being available on her EP, aptly entitled Blessed by Words.

Kat constantly pushes the boundaries of performance poetry and incorporates acting in much of her work. Forging a name for herself in theatre, Kat wrote and performed her first production, Seven Times Me, at the Theatre Royal Stratford East in 2007 before going on to tour nationally, then internationally, including the Edinburgh Fringe
Festival in Scotland and the Adelaide Fringe Festival in Australia, in 2008. The play, which was directed by Dawn Reid (Funny Black Women On the Edge, The Harder They Come), received critical acclaim and four star reviews.

In addition, Kat also wrote and performed one woman play, Raising Lazarus, which chartered the journey of West Indian soldiers who came to England to fight during the First World War. Also directed by Dawn Reid, Raising Lazarus, premiered to a sell out audience in the Theatre Royal Stratford East studio space and is currently in further development with a view to touring nationally.