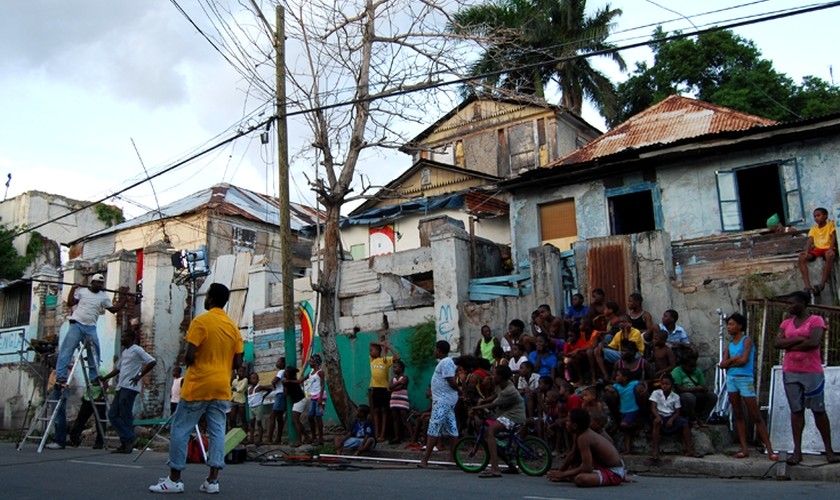 This new gripping action drama from Jamaica now enters post-production and is expected to release in theatres in 2010.

Shot entirely on location in downtown Kingston, the production breaks new ground as Jamaica’s first noir thriller. While the film continues in the successful tradition of Jamaican urban dramas such as The Harder They Come, Dancehall Queen and Third World Cop, Kingston Paradise employs a unique visual style along with unexpected plot elements. “Kingston Paradise tells a funky off-beat story with serious drama, exciting action, funny moments, and a philosophical twist,” says Mary Wells, who also wrote the script for the 90-minute film.

Mary Wells Directs New Jamaican Film with Strong Local Cast and Crew. Much of Kingston Paradise was shot in the neighbourhood of Southside in downtown Kingston. The local community was closely involved in the grassroots production. When the residing children came out of school, they often watched the film shoots.

The story of Kingston Paradise revolves around Rocksy, a young Jamaican taxi driver who survives the edgy streets of downtown Kingston by hustling and pimping. Together with his prostitute Rosie and friend Malt, he dreams of the quintessential Caribbean beach paradise and the glamorous fast life. When one day they see a fancy sports car parked in front of their humble dwellings, they plot to steal it in order to make some quick bucks and to change their lives. After a thrilling car chase, they get hold of the car, but how to sell it? “And from here on they discover more about how to be and how to find their own paradise, their own peace in life along a straight and narrow path,” Wells explains.

Wells: “I feel very fortunate with this group of talented actors. For many it was their first performance in a feature, but they were all great and very committed to the project. I hope this film will inspire many young people.”

Kingston Paradise is a Jamaican/Dutch co-production between FilmeArt, which is Wells’ film company, the Creative Production and Training Centre (CPTC), Jamaica’s leading multi-media production and training house, and Caribbean Creativity, an Amsterdam-based organization that aims to stimulate and promote Caribbean film projects. “CPTC is an incredible co-production partner. They have provided all the technical equipment as well as most of the crew, and much more. Caribbean Creativity has been of great importance as well. Although operating from the Netherlands, they supported the project from the start and have brought in invaluable financial and creative input,” Wells says.

Emiel Martens, Chief Executive Officer of Caribbean Creativity, states: “Making a feature film in Jamaica is a pretty daring proposition, but Mary has been able to bring together a dedicated team of filmmakers and actors who were more than up to the job and who’s expertise will make Kingston Paradise a compelling cinematic experience for Jamaican and international moviegoers.” Kingston Paradise has the potential to become the next cult flick out of Jamaica. “The story is very Jamaican, very Caribbean, and has a look and feel that people worldwide will hopefully respond to,” Mary concludes.