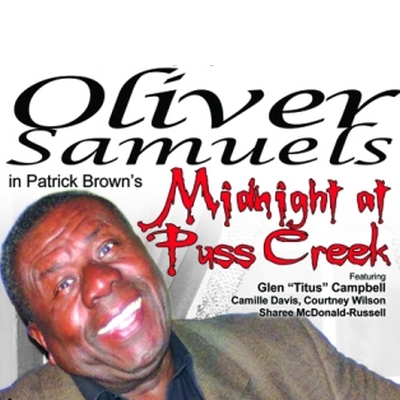 Midnight at Puss Creek is Jamaica’s first indigenous Who-Dun-It, and has been a labour of love for playwright Patrick Brown, Artistic Director Trevor Nairne and the entire cast.

The cast is led by the inimitable King of Caribbean Comedy, Oliver Samuels O.D., the epitome of comedic acting on the Caribbean stage. Just the mere mention of his name evokes laughter from across the Caribbean Diaspora. Many would travel miles just too see Oliver walk out onto the stage. To see him in his element is sheer delight.

Oliver gets admirable support from a man who needs little by way of introduction – Glen ‘Titus’ Campbell. The ensemble cast is completed by Camille Davis, Courtney Wilson, and Sharee McDonald-Russell.

Midnight at Puss Creek gets its name from the fictitious gothic old mansion which is owned and inhabited by the family matriarch Zedla Matalon (Sharee McDonald-Russell), her army of cats, and housekeeper Della. Hated by all and sundry because of her less than generous attitude, Zelda finds herself at death’s door, with all and sundry waiting to ‘pick at her bones’ the moment she passes. It is this uncertainty about Zelda’s final wishes which sets off a trail of uncertainty amongst those gathered.

The intrigue is intensified many fold when a murder is committed, and all the survivors are seen as suspects, and are at once suspicious of each other. Enter Detective Inspector Tracey (Courtney Wilson) and Constable Tek Bribe (Glen Campbell), whose investigative methodology evokes more fun and laughter than it succeeds in solving the crime at hand.

Oliver Samuels plays the estranged son of the matriarch Zelda Matalon. Fifteen years a celibate widower, he is seen as somewhat special and relies on the Holy Spirit and the bottled ‘spirits’ to help him cope with the painful burden of his son’s incarceration. Long disinherited by his mother for marrying someone she disapproved of, this motorcycle-riding civil servant arrives at Puss Creek hoping that Zelda (on her death-bed) finally plans to atone by leaving him a hefty legacy? But the big question is: would he kill to secure it?

Then there is Zelda’s long-suffering maid Della (Camille Davis). This self-styled fashionista carries a hankie with which she constantly pats at her watery lips. Are 10 years of ‘dedication’ to Zelda and the army of puss about to pay off? This raises the question: does Della conceal a darker side? … capable of murder? This same question is asked of all those left standing after the mysterious murder, leaving the Detective Inspector and his assistant to unravel a case which gets more complicated as time passes.

The audience finds itself dragged into the story as it unfolds, with Tracey even asking them to hazard their own guess as to who could have committed the heinous crime. This they are required to do during the Intermission break, by dropping their choice in one of the ‘decision boxes’ provided for that purpose. At the end of each night’s performance a name is drawn from the box corresponding with the Murderer. The owner of the ticket drawn walks away with a prize.