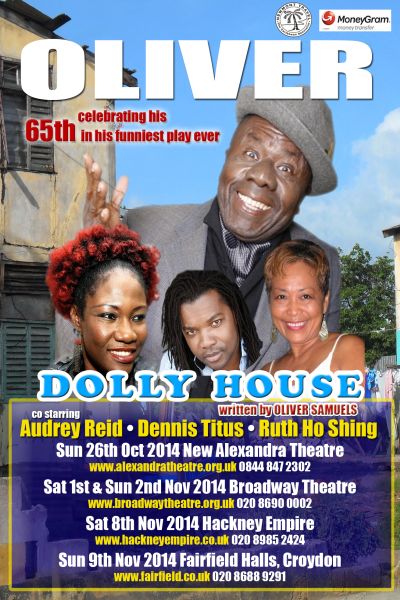 The audience will be treated to his best production yet! His hysterically funny play ‘Dolly House’

The Play Dolly House, is a wonderful mix of Jamaica’s favourite topics; politics, power, intimacy, race, class, mistrust and betrayal, all co-mingled into one hilarious comedy with the belly cramping humour that only Oliver can produce.

It is well documented that Embassy Saga, his previous production, is one of the funniest plays in the history of Jamaican theatre and when asked how Dolly House measured up, Oliver replied, "Unu jus nuh see nutten yet."

Tenants include a middle aged Chinese woman whose hormones seem larger than her mouth; a young dreadlocks man who carries five phones and has about six different names; a Higgler who insists that her constantly overdue rent for her one room and shared bathroom is due to her, finishing up her 4 story mansion in the hills.

Finally; two bad men who "just nuh into the rent paying ting." Insanity you think? As Oliver said– "you ain’t seen nothing yet!"

The promoter of this event Bagga John Of BJ Promotions, who has promoted the previous two sell-out Oliver tours had this to say about the up-coming tour, "Patrons lucky enough to secure a ticket for the UK performances should consider themselves indeed fortunate to be able to see at first hand the real ‘Bigman’ of comedy Oliver Samuels, along with a star studded cast, Celebrating his 65th birthday in real Jamaican Theatre style. BJ Promotions have been bringing the UK public top reggae and theatre stars from the Caribbean for over a decade and are delighted to once again present the fabulous talent that is Oliver Samuels."