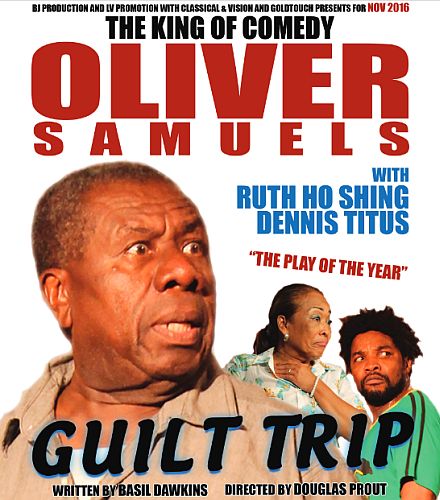 Following his huge success of Divorce Papers & Dolly House. Jamaica’s King of Comedy is back with another blockbuster – Oliver Samuels Guilt Trip Tour 2016.

The legendary actor and renowned comedian, once again gives us an evening of sheer laughter in the hilarious Guilt Trip, with Co stars Dennis Titus and Ruth Hoshing. This exciting new comedy-drama is written by Basil Dawkins and directed by Douglas Prout and Toni-Kay Dawkins.

The Guilt Trip is a comedy drama which examines the life of a woman who out of fear did something many years ago which continuously haunts her and impacts on the lives of all those associated with her. The play is packed with humours insight and relevance for today. Guilt Trip reminds you that knowledge of your past can turn out to be cruel, but it can also be a powerful and invigorating force.

Don’t miss this at a venue near you