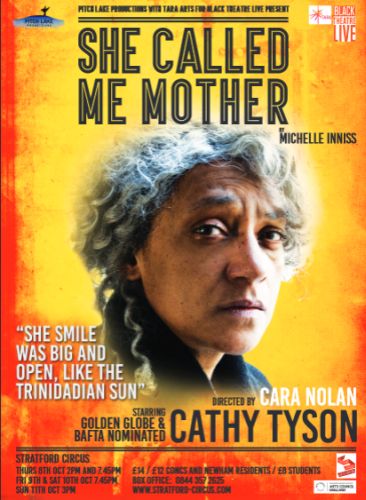 She Called Me Mother by Michelle Inniss

“When she gon come? I lookin at de people dem but I can’t see her. She a pretty lookin ting, she does stan’ out amongst these faces dripped in dissatisfaction…”

Evangeline is waiting; she has been waiting a long time. She waits for the Black Swan to glide through the station and show her a little warmth and kindness. She waits for a ticket home to Trinidad, the sun, the mango trees, and the street vendors selling curry. She waits for Shirley the daughter she let walk away all those years ago.

“I try not to tink about she too much, ’cause de pain dem thoughts bring it like a heard of buffalo runnin wild in a field, an I beneath dem foot.”

She Called Me Mother FULL TOUR LINE UP

Theatre performances through October and November 2015

Fri 6 Nov at 7.30pm the performance will be live streamed over the internet from Derby Theatre, run in partnership with Pilot Theatre company.