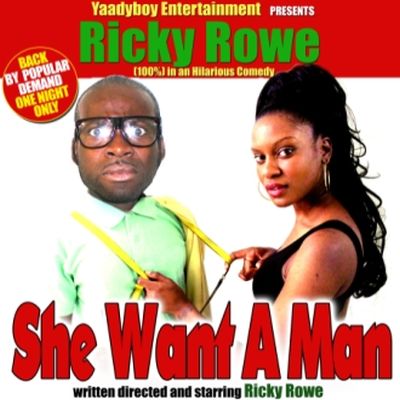 After a successful tour of Birmingham the play is back on the stage where it was born the Broadway theatre for one last special performance.

Filled with the pulsating rhythm and dance’s of the streets of down town Kingston with the contrast of the rich wealthy suburbs of St Andrew Jamaica its sure to leave you saying a yah so nice!! The play follows Clair, a young sexy and attractive girl who sits at home reading love novels and fantasizing about her prince charming Marcus Oral a nerdy mamas boy who cannot stay out past 10 O’clock.

Percy Jones, Clairs father approaching his final days becomes adamant that Clair finds herself another man and gives him grandchildren before he dies, so he takes out an advert in the news paper, offering a reward to any man who will marry to his daughter and give grandchildren.

His plan takes a turn for the worst when his advert starts to attract some unsavory characters. SHE WANT A MAN who will it be?

Featuring a vibrant and energetic cast, this play will leave you falling from your seats with laughter.