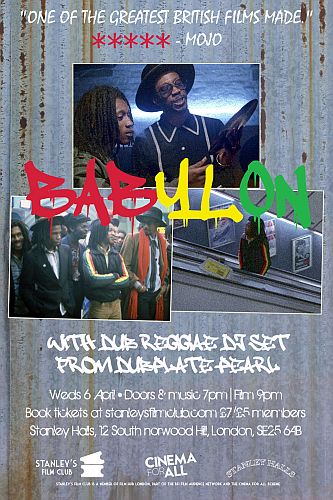 Come along and enjoy quality cinema in our grand yet informal setting. Stanley’s Film Club puts the magic and sense of occasion back into cinema-going and offers a welcoming space for film fans to come together, complemented by a bar serving craft beer and snacks.

BABYLON (Franco Rosso; 1980; Certificate 15) is a gritty cult drama starring Brinsley Forde of the reggae band Aswad. The story follows a week in the life of Blue, a young Rastafarian musician who hopes to rise above the trials of his daily life and succeed at a soundclash competition with his Reggae Sound System Ital Lion. Filmed on the streets of Brixton and Deptford in the early 80s when Jamaican sound system culture was at its peak and racial tensions were high, Babylon was the first British non-documentary film focused on reggae music.

With its driving dub reggae soundtrack, this politically sensitive film highlights the social and racial struggles of the British black working classes in Thatcher’s London. An exciting chance to watch this film in South London close to the beating heart of London’s reggae scene.

Arrive from 7pm to enjoy Caribbean food + reggae and dub rhythms from DJ Dubplate Pearl, before we kick off the film at 9pm.