Home > UK > Arts > The House That Will Not Stand 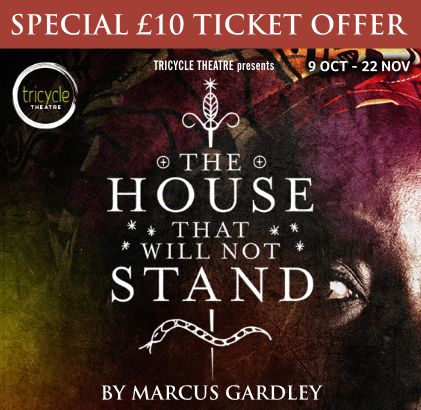 "You may be the wealthiest colored woman in New Orleans but you built this house on sand, lies and dead bodies."

New Orleans, 1836. Following an era of French colonial rule and relative racial acceptance, Louisiana’s ‘free people of color’ are prospering. Beartrice has become one of the city’s wealthiest women through her relationship with a rich white man.

However, when her partner mysteriously dies, the foundations of freedom she has built for herself and their three unwed daughters begins to crumble. Society is changing, racial divides are growing, and as the household turns on each other in their fight for survival, it could cost them everything.

A bewitching new drama of desire, jealousy, murder and voodoo.

Marcus Gardley was awarded the 2011 PEN/Laura Pels award for Mid-Career Playwright. He is the recipient of a Helen Merrill Award, a Kesselring Honor, the Gerbode Emerging Playwright Award, the National Alliance for Musical Theatre Award, the Eugene O’Neill Memorial Scholarship, and the ASCAP Cole Porter Award.

The New Orleans of Marcus Gardley’s play is infused with this unique form of African-American religion, transported to Louisiana via the slave trade. In this myth-busting talk, Dr Louise Fenton (Wolverhampton University) explores the roots of voodoo and the impact that it’s had on New Orleans culture over the last 200yrs.

Get Tickets for £10 when you book shows between9-18 October.
Simply use the code HOUSE10 when booking by Phone or online.
Call 020 7328 1000
Limited Offer Advanced Bookings Only.