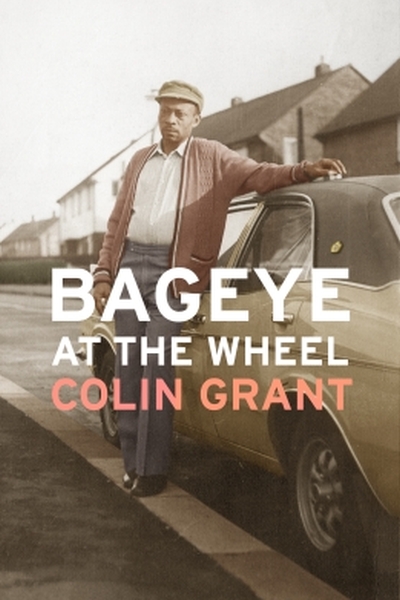 A Memoir – Bageye At The Wheel by Colin Grant

A compassionate but unsentimental tale, rich in comic observation, of growing up in a provincial town of immigrants – Irish, Asian and Caribbean – rubbing along amicably and sometimes not so amicably with their English hosts, before the rise of the EDL.

There weren’t many black men in Luton in 1972, and most of them gathered at Mrs Knight’s for the all-night poker game. Each had his own nickname – Summer Wear, Pioneer, Anxious, Tidy Boots and Bageye, Colin Grant’s father.

In this unique and wonderful memoir, Colin Grant gives us a portrait of his father through the eyes of his ten-year old self. Bageye finds it a struggle to feed his five ‘pickney’ on his wage from Vauxhall Motors, and his wife Blossom is also keen for him to spend less money on gambling and more on shoes for his children. And then she sets her heart on her sons going to private school…

When Bageye acquires a less than roadworthy old car, he sets himself up as an unofficial minicab service, not seeing his lack of driving license as any form of barrier. However he finds his marijuana deals are more profitable, until he entrusts Colin with finding a hiding place for a large bag of ganja…

In the tradition of Sam Selvon’s Lonely Londoners and V.S.Naipaul’s Miguel Street, Grant’s Bageye at the Wheel does for Luton and the UK what Miguel Street did for Naipaul, Port of Spain and Trinidad.

Colin Grant is a historian and BBC radio producer. He is the author of Negro with a Hat, a biography of Marcus Garvey and I&I: The Natural Mystics, a group biography of the original Wailers, Marley, Tosh and Livingston, which has been hailed as one of the best music books of 2011.