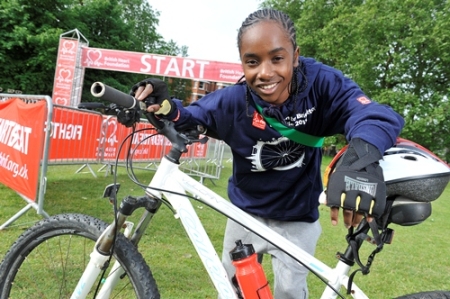 Sky’s Got to Dance star, Akai, saddles up to fight for every heartbeat at the BHF London to Brighton Bike Ride

Over 28,000 cyclists took part in the British Heart Foundation’s (BHF) London to Brighton Bike Ride, one of the most iconic charity cycling events in Europe, on Sunday 16th June.

Scores of African and Caribbean riders took part including young street dancer and performer Akai, who won Sky’s Got to Dance and stars in children’s comedy film All Stars.

Akai, 14, said: “I am so proud to have taken part in the British Heart Foundation’s (BHF) London to Brighton Bike Ride this summer. It is such an iconic event, I couldn’t wait to take on the 54-mile ride challenge. It was great to be riding alongside my dad on Father’s Day and my mum, who is also taking on the challenge as our family has been affected by heart disease.

“The training was quite intense but I was determined to succeed and I knew that the experience on the day would be worth all the hard work. The atmosphere, the excitement and the feeling as I crossed the finish line was brilliant. And, of course, it was much easier on the day knowing I’d raised funds for a worthy cause. All my ‘Akstars’ showed huge support by sponsoring me and helping the BHF to raise much-needed funds for the research needed to fight heart disease, the UK’s single biggest killer.”

The BHF London to Brighton Bike Ride, supported by Santander, is now in its 38th year. Around 750,000 riders have taken part, pedalling more than 40 million miles between them and raising over £57 million for the BHF.

Ali Orhan, BME Project Manager at the BHF, said: “The ride is a great opportunity for people to take on a huge physical challenge and raise much needed funds for our life-saving work. But we’re still urging people to get on their bike now the ride is over.

“African Caribbean communities can be at higher risk of developing heart disease so it’s important we all stay active. Of course, you don’t need to cycle 54 miles each day! Using your bike to go to work, do your shopping or visit a friend instead of jumping in your car or taking the bus all add up to helping your heart.”

Figures from the BHF show African Caribbean communities are twice as likely to have a stroke as people of a European origin yet around one in four African Caribbean adults in the UK don’t realise their ethnicity increases their risk of high blood pressure and diabetes – major risk factors for stroke and coronary heart disease.

To find out more, visit bhf.org.uk/africancaribbean