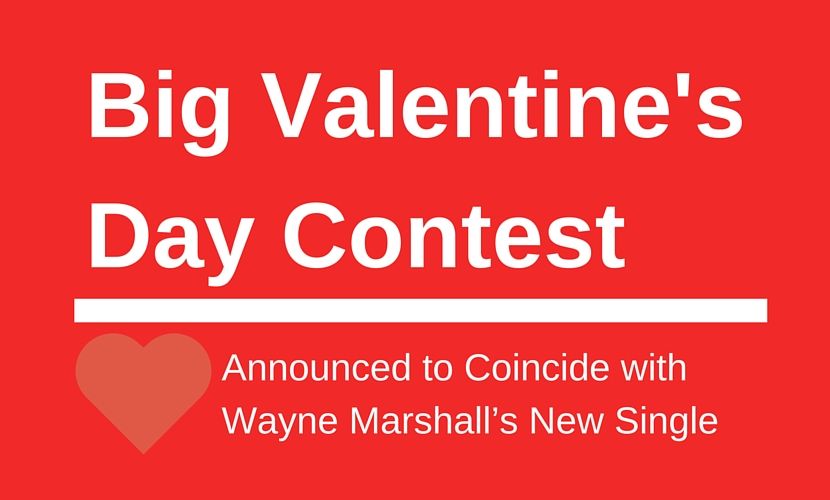 To celebrate the announcement of his long awaited single, R&B/Soul singer Wayne Marshall is launching an amazing Valentine’s Day competition.

To celebrate the announcement of his long awaited single, R&B/Soul singer Wayne Marshall is launching an amazing Valentine’ s Day competition. It’s all being done to coincide with the release of his new album and for the promotion of the single “You Are the Princess”. This is part of a series of competitions with some amazing prizes are up for grabs.

So in celebration of the release of his new single, ‘You are a Princess’ Wayne Marshall wants to give a lucky lady the opportunity to be wined and dined by that special person in her life (Just like a Princess). In order to achieve this, the singer is running a special competition for this Valentine’ s Day where a lucky woman is going to be pampered like a Princess for the day.

Master Chocolatier Paul Wayne Gregory will be contributing a bespoke chocolate hamper as one of the competition prizes. The winner will also be picked up by a chauffeur driven limousine courtesy of Limo GB where they’ll be whisked away for an exquisite 4 star dining experience courtesy of Ayannas London. If that wasn’t enough, a black and white oil painted Portrait courtesy of Marinefineart will also be among the prizes, as well as a pair of tickets to the exclusive Mary Martin Fashion Show in Mayfair – (A Tribute to David Bowie) courtesy of Mary Martin London.

Oh, and it does not stop there, 2 contemporary floral arrangements courtesy of Meade’s Florist will also be contributed as a prize, and to mark the official rebranding of Morant Bay Rum, a distinctively bespoke rum package will also be thrown in for good measure courtesy of Morant Bay Distillery LTD. Thought that was it, there’s even more than expected, the winner’s and runner’s will also receive Champagne & Wine courtesy of Oceano Restaurant.

To enter the competition is as easy as a-b-c, a) listen to Wayne’s new song, b) Answer a simple question pertaining to the song and c) Tell a few friends about the competition. The person that refers the most friends wins. For more details visit: waynemarshallcontest.co.uk

For those not based in London (UK) there is an opportunity to win a copy of the new single just for telling others about Wayne’s new song. So participants from around the world are welcome.

The new Wayne Marshall single ‘You Are the Princess’ is set for release on 26th May 2016. It will be available via digital download on ITunes, Amazon, Google Play and all leading download stores. The track will also be available on Wayne Marshall’s own website which is due to launch a month from now.