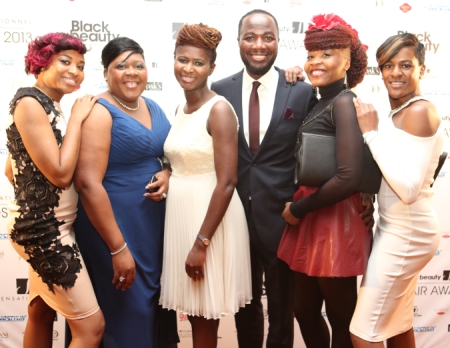 The Hilton London Metropole was buzzing with anticipation as hundreds of top Afro Stylists from the UK and Europe gathered for the prestigious Black Beauty/Sensationnel Hair Awards 2013 ceremony on Sunday 1 December 2013.

The event, which is not to be missed, puts the spotlight on the skill and artistry involved in Afro styling, and proving they are top of their game was the team at Afrotherapy in London. Michelle Garande scooped first place as Avant Garde Stylist of The Year 2013 and the Finalist position in the Braid Stylist of The Year.

One win and one finalist place was still not good enough for the Afrotherapy team as they then made Finalists in the Styling Team of The Year category. The evening began with a cocktail reception followed by a three course meal and was opened by one of the UK’s finest comedians, Angie Le Mar. A hair fashion show followed which wowed the audience, and then to finish the night a top London DJ took to the decks to round off the celebrations