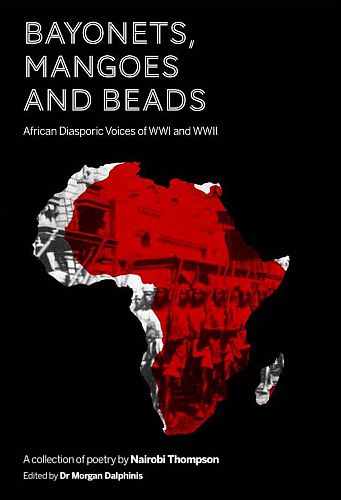 Bayonets, Mangoes and Beads to reveal the secrets of War

When the Jamaican playwright Claud McKay wrote the eclogue If We Must Die during the early 20th century, he wasn’t to know that Winston Churchill would later use the poem as a rallying cry for British troops during World War II. Almost seventy years later, and as part of the national centenary commemorating WWI, a new and explosive book by the performance poet and author Nairobi Thompson has continued on from both McKay and Churchill left. Entitled Bayonets, Mangoes and Beads, the book is a unique collection of work heralding the untold stories of Commonwealth soldiers from Africa and the Caribbean during both World Wars.

Nairobi’s reliance on interviews with veterans, reference books and archive materials, personal testimonies, along with academic footnotes; the mix of poetic styles from haikus to Patwah makes ‘Bayonets, Mangoes and Beads’ the first of its kind in Europe.

Ms Thompson is a prolific writer with a rare ability to capture and entertain the minds and the hearts of her audience. A poet of our time.
Bayonets, Mangoes and Beads will be launched at the Dugdale Centre in Enfield at 7:45pm on 10th October 2016. The book launch will involve readings and theatrical performances from Nairobi Thompson, followed by questions and answers.
For more information about the author visit http://www.nairobithompson.co.uk

For all show enquiries please contact the Box Office on 0208 807 6680 or e-mail us at boxoffice@enfield.gov.uk. The Box Office is open Monday – Saturday 10am – 5pm or until showtime on an evening of a performance.

Quotes:
‘Bayonets, Mangos and Beads’ presents us with heroes, agitators, lovers and legislators in all their humanity – and we are left in no doubt as to the need to remember all our fallen.
Stephen Bourne — Author

This is an inspirational book. Nairobi has captured the spirit and rhythm of our ancestors in her poetry. The collection is a must for all.
Patrick Vernon OBE — Founder of 100 Great Black Britons

Nairobi Thompson reveals the harsh challenges of racism, colonialism…and trench warfare, all the while cleverly aligning these forgotten soldiers’ realities with our own.
S.I. Martin — Author and Historian

Thompson compels the reader to remember the role of race, to digest the importance of culture and to be mindful of the formative nature of identity.
Dr. Nicola Rollock — Deputy Director, CRRE University of Birmingham

About Nairobi Thompson
Nairobi Thompson is a writer and performance artist with a distinctive style and tone that hearers are quick to compare to the late Maya Angelou. She burst onto the poetry scene 3 years ago, and rapidly became a sought after feature on the London circuit writing and performing for Baroness Doreen Lawrence and Carmen Munroe MBE. She has performed with Victor Romero Evans, Janet Kay, Omar, Brenda Emmanus, Paulette Tajah, David Neita and she is collaborating on projects with Sherry Ann Dixon, Menelik Shabazz and Patrick Vernon OBE. Her one woman poetry shows are always sold out! She takes to the stage and holds the audience captive in the same way a skilled musician or clever comedian does.