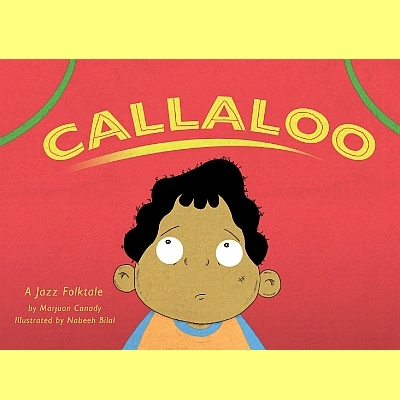 Avoiding wicked stepmothers, cursed spinning wheels, and evil witches with houses made out of junk food are things all young children learn from fairy tales. But what about a new fairy tale that teaches kids moral lessons with a dash of culture? Here to guide children through a brand new Caribbean adventure is Marjuan Canady and her new book, Callaloo: A Jazz Folktale.

Telling the story of a Caribbean- American child in the city, Canady takes kids on a wild adventure from the hot sidewalks of New York City to the tropical islands of the Caribbean. On the way, the main character, Winston, encounters countless mythological beings, learns several words of dialect, and discovers the importance of not being greedy. Inspired by Trinidadian Etienne Charles’ “Folklore” jazz album, this story is also complemented, visually, by the vivid and contemporary illustrations of artist Nabeeh Bilal.

The resultant book is a terrific way for kids to learn important life lessons while taking in a wonderful new culture!

“Caribbean and Caribbean-American people have made strong contributions to the landscape of American society, specifically through arts and culture,” says Canady. “Many writers and artists of Caribbean descent participated in the Harlem Renaissance and in the development of American music including jazz and hip-hop. This book celebrates our history and culture in a contemporary and relatable way for all children. It follows a Caribbean-American boy who truly experiences the island of his family, examining his own experience as a second generation Caribbean-American.” Major themes in the book include:

Callaloo: A Jazz Folktale takes children on a wild ride as they learn about Caribbean food, language, traditions, and folklore.

Marjuan Canady, a native Washingtonian with Trinidadian/African-American roots, is a published writer, actress, playwright, director, educator and producer for both film and the stage. Her one-woman play, Girls! Girls? Girls. has been featured Off-Broadway, at national festivals, regional theaters and over fifty schools nationwide. Her second play, Callaloo: A Jazz Folktale, has been seen at the Ellington Theater and IATI Theatre.

For this work, Canady served as a featured playwright at the 2013 Lincoln Center for Performing Arts Director’s Lab. A Matteo Ricci and Schomburg Mellon Fellow, Canady is the founder and creative director of her production company, Sepia Works. Her diverse acting work includes plays, films, television, commercials and voiceovers. Canady currently writes for The Caribbean Current and recently starred and co-produced the short film The Resort, shot on location in Tobago, WI. She is also currently directing her first documentary, Girls! Girls? Girls. set to release in 2015. In 2013, she published her first children’s book, Callaloo: A Jazz Folktale, for which she was recognized by The National Library of Trinidad and Tobago in their First Time Author’s Awards program.