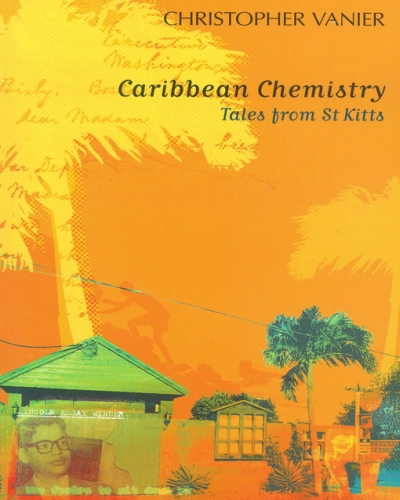 Vanier’s story begins where we all begin: conception. This delightful piece of life writing, set on the Caribbean island of St Kitts, recalls the mischief of Vanier’s childhood: sneaking out to the cinema after school hours, throwing stones at a passing car, disastrous experiments involving various acids and a rocket. Is this boy lost in the plain sailing of childhood or can he turn his curiosity into Caribbean Chemistry?

This is a story of self-discovery, told candidly in language rich enough to eat: “Breadfruit, breadnut, bamboo, lignum vitae, marouba, weedee, and calabash.”

Funny and engaging – a story about breaking the barriers of identity and finding them again. A rare view of the emigrants tale.

An invitation to re-live the mischief of an island childhood: giving your baby brother to an ungrateful monkey, hair-raising jaunts on a volcano, disastrous experiments involving rocket…
Set in the mini-states of the Caribbean – St. Kitts, Nevis, Antigua, Barbados – Chris Vanier captures the warmth and humour of the region so vividly you feel might have been there.

Beset by a troubled colonial legacy, both Christopher and his island yearn for independence. This memoir tells the tale of how a small islander feels, and how he goes about finding an identity. In a loving portrayal of island life, Vanier explores the closeness and security of its cocoon, set against a young boy’s dreams and ambitions. By asking if you leave home, can you ever return, it is a rare view of ‘the emigrant’s tale’. A journey of self-discovery, told candidly in language rich enough to eat. About the author: Christopher Vanier has read at the British Institute of Paris and The American Library of Paris. He is an award winner in the WICE Paris Writers’ Workshop and has been guest of honour at the Oxford Bicentennial Lincoln Conference. Having followed a career as an engineer, Christopher now divides his time between France and the UK. He is available for interview – contact: