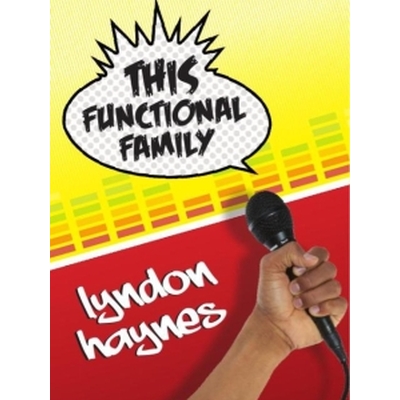 This Functional Family From Inner City to Centre Stage by Lyndon Haynes.

From a strict upbringing in seventies Tottenham to the stage at Wembley Arena, this is the true story of ‘Lyn E Lyn’ best known as rap artist with the 80s crew Sindecut.

In his own words, Lyn E Lyn aka Lyndon Haynes, recalls the pleasures and privations of a childhood in an inner city, his lifelong battle with Sickle-cell Anaemia, and his equally protracted determination to succeed.

Supported by his ever-loyal family, his early teenager years saw him become a successful child actor, appearing on television and the stage. In the late eighties, his passion shifted to a new musical phenomenon that was sweeping the British Isles from America: Hip Hop.

Caught up in a tide of musical passion, Lyndon was there at the birth of a completely new scene in London, beginning with small gigs in pubs and clubs, and, with Sindecut, gradually rising to become one of the hottest acts around. But, as ever, stardom and youth are often not the strongest combination, and with a candour only an insider can give, he recalls the pressures of both fame and commercialisation, and how the crew’s refusal to be enslaved to their major label recording contract led them to fragment and eventually disintegrate: a terrible waste of talent and potential.

This Functional Family: From Inner City to Centre Stage is a touching and in depth tale of perseverance, resilience and strength with strong emphasis on the huge role a comprehensive family network has in the life of an inner city boy trying to make it big.