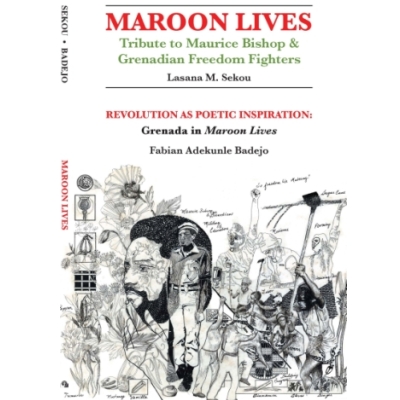 “On October 19, 1983, Prime Minister Maurice Bishop, leader of the Grenadian Revolution, and his closest advisers were assassinated by the country’s army, and six days later, the USA executed its long-planned invasion of the Spice Isle.” That’s how the preface by Lasana Sekou opens his just released book from House of Nehesi Publishers (HNP).

The publication is entitled Maroon Lives – Tribute to Maurice Bishop & Grenadian Freedom Fighters by Lasana M. Sekou; Revolution As Poetic Inspiration: Grenada in ‘Maroon Lives’ by Fabian Adekunle Badejo, and is available at www.amazon.com and other bookstores.

“Thirty years later, the scars left by the assassination of the charismatic leader of the New Jewel Movement of Grenada, Maurice Bishop, are yet to heal completely. Maroon Lives was and remains for me a dirge for a revolution gone bad; a revolution that held out the best hope for not only the Grenadian people but for the whole of the Caribbean, ” said Badejo about the title that he collaborated on with Sekou. Keith Ellis, author and professor emeritus at University of Toronto, is certain that Sekou’s Maroon Lives, as a “powerful extensive elegy that privileges revolution-like others by José Martí and Nicolás Guillén-will not grow old, nor will the brilliant essay by Fabian Adekunle Badejo that accompanies it. ”

The first part of the book is collection of poems by Sekou. He takes aim at the Bishop assassination, the US invasion, and tensions generated by revolutionary struggles and the search for justice. Chapter two is Badejo’s in-depth study of Maroon Lives and the critical relationship between literature, revolution, and the transformation of societies. The authors acknowledge both the achievements of the Grenada Revolution and what Sekou calls in the poem ‘War Dogs,’ its ‘abortion slaughter.’ “But revolutions don’t die once they enter into the hearts and consciousness of people where no weapons can dislodge them, ” said Badejo.

“The re-publication of Maroon Lives by Lasana Sekou and my paper on it two generations later is proof positive that the dream of Maurice Bishop lives on, like the maroons. ”

First released as Maroon Lives – for Grenadian freedom fighters, with only the poems written between the arrest of Bishop and the Urgent Fury invasion, the 1983 edition was hurriedly published in New York, just a few weeks after the US invasion on October 25. Sekou was a Howard University graduate student at the time. Badejo’s study was first presented at the Caribbean Studies Association conference in 1984.

In the preface to the beefed up edition of 2013, Sekou hopes that Maroon Lives “will resonate with today’s protest poetry, related literary criticism, and dispatches from the culture wars and the challenges of globalization. ”

The St. Martin poet also wants the tribute title to “inform somehow the discourse and defiance of the enterprise of imperialism whatever shape, form, or guise this may take. ”