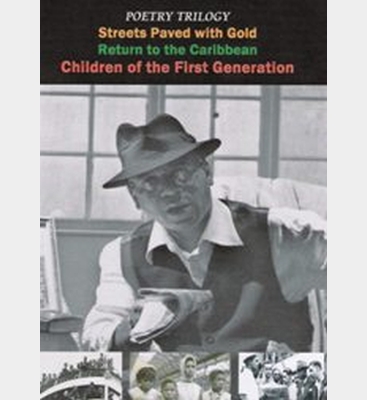 Streets Paved with Gold, Return to the Caribbean & Children of the First Generation – The Poetry Trilogy by Victor Richards

In 1948, the first Caribbean immigrants arrived in Britain aboard the SS Empire Windrush. Full of hopes, dreams and the promise of new lives in a supposedly nurturing ‘motherland’, they disembarked instead into decades of heartache and struggle beyond their wildest imaginings.

Victor Richards’s parents were among the thousands of West Indians arriving in post-war Britain. Subsequently, Victor has devoted his life to an impassioned one-man crusade articulating the trials and tribulations facing generations of British West Indian families as they struggled for acceptance, faced crushing disillusionment and made sense of an often enigmatic, and sometimes unwelcoming new land.

Already acclaimed for his one-man plays (Streets Paved With Gold, Return to the Caribbean and Children of the First Generation), Victor now brings his unique experience, sensitivity and perspective to his first poetry trilogy. Initially adopting the persona of first-generation Barbadian Augustus Cleveland Johnson, every poignant word takes you on a heart-wrenching journey through the decades. You’ll share the joys and disappointment as he builds his new life. Later, his son Granville takes up the storyteller’s baton to highlight British West Indians’ experiences from 1948 to the present. From the double standards of Church officialdom to Teddy Boys’ racial violence; from the cool soul and reggae of Blues MCs to doting Caribbean mothers, all life is present in the acute observation, humour and emotion of Victor’s writing.

From the wide-eyed wonder of Augustus Cleveland Johnson’s first drive through London, to the frustration-fuelled riots of Seventies Britain; from the reassuring constant of family and community, to Granville’s coming of age tales as a spirited young man in Northamptonshire, the only certainty is that you’ll be irresistibly engaged by the writing.

Engrained as it is with sadness, joy, frustration, homesickness and a thousand other emotions, the honesty of every word will resonate with young and old, Asian, black and white alike. So much more than mere entertainment, Victor’s new poetry trilogy, just like his plays, is a unique educational tool for the now generation, a valuable historical record, and a powerful instrument for building cross-cultural understanding.