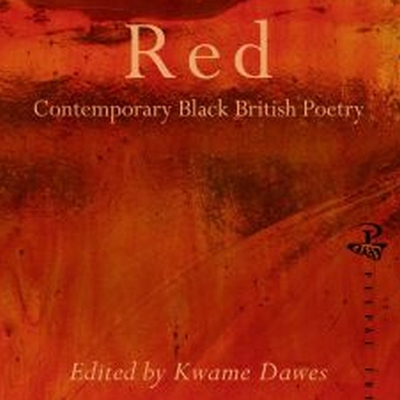 “…this fiery collection demands to be noticed…” Margaret Busby

RED is the first anthology of contemporary Black British poetry for ten years, since Lemn Sissay’s groundbreaking, The Fire People. Published by Peepal Tree Press, the leading publisher of Caribbean and Black British Literature, RED is launched through their new Inscribe imprint for Black British writers.

“The term Black British is an evolving one.” Therefore, “If a poet felt comfortable with the label ‘Black British’, then he or she was welcome to submit work to the anthology,” says editor, Kwame Dawes in his Introduction. The breadth of this label is evident from the first entry in the anthology – ‘Red’ by Abdullahi Botan Hassan translated from the Somali by Martin Orwin.

RED collects poems by Black British poets writing with the word ‘red’ in mind – as a kind of a leap-off point, a context, a germ – the way something small, minor, or grand might spur a poem. It offers the reader the freedom to come to whatever conclusions they want to about what writing as a poet who is also Black and British might mean. The collection succeeds in producing poems that seem to be first about image, and only then about whatever else fascinates the poet. In this sense, RED illustrates the diversity of Black British poetry whether in the richness of the entries, the moods, the humour, the passion, the reflection, the confessional – all confirm that Black British poetry is a lively and defining force in Britain today.

RED shows that Peepal Tree Press is the publisher to watch for new Black British writing.

The launch of RED takes place in association with The Arvon Foundation at the Free Word Centre in London on Thursday 18 February at 7pm with Kwame Dawes, Bernardine Evaristo, Simon Murray and others from the Red anthology. For bookings call 020 7324 2554. A tour is being planned for late spring/early summer 2010.