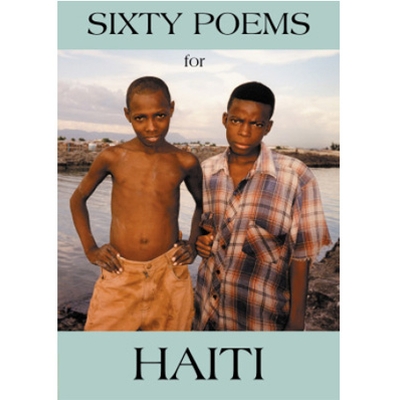 The collection comprises poems from authors ranging in age from 12 to 89 and located in the West Indies, UK, Ireland and Europe. Some contributors are seasoned – even famous – poets; some beginners; the only brief given was to send a poem for Haiti. Some have responded directly, or elliptically, to the traumatic events on and after the earthquake of January 2010; others have sent a selection from their recent work as gifts to the people of Haiti.

All of them have given their work for free, the aim being to raise a few dollars more for the reconstructive work on the island, and to provide a good stimulating read. Amongst the contributors are West Indian pioneer Kamau Brathwaite, Debjani Chatterjee, Trinidadian scholar Vahni Capildeo and the St Lucian man of letters, Kendel Hyppolyte.

The collection is also the book of the concert – an event to be held in Broadstairs on 26th June and to be hosted by many of the authors represented in the anthology. At least 90% of the ticket price and that on the cover of the first edition of the book will go directly to the Lambi Fund whose mission is ‘to assist the popular democratic movement in Haiti.’

The Fund “provides financial resources, training and technical assistance to peasant-led community organizations that promote the social and economic empowerment of the Haitian people.” Maggie will publish the total raised on her website (www.maggieharris.co.uk). All profits from future editions will also be given to the fund. Copies of the book will be available directly from the publisher.

Cane Arrow Press, the publisher of the collection, was set up in 2009, inter alia to promote the poetry of Trinidad and Tobago. Emanating from one of the last British colonies in the Caribbean, the poetry of the twin island state has had to make up a century-and-a-half head start on the longer standing Anglophone West Indian territories such as Barbados and Jamaica. Although the novels of Selvon and Naipaul have received international recognition, the poetry of the nation has not been collected since Papa Bois – a 1947 collection from a group of writers known as the Five Folio Group – a failing Cane Arrow hopes to put right.

A twin aim of the press is to support the poetry and philosophy of West Indian Britain. In the same way that T&T poetry exists on the margins of WI poetry, so West Indian British poetry fulfils that limbo position in exile. Dedicated to the idea that the best creative writing comes out of the crossroads of cultures, the press has so far released three books and aims to publish about three books a year for the foreseeable future.

Next on the agenda is that long awaited T&T anthology and the press is also working on the reprint of Cy Grant’s Ring of Steel which celebrated the nation’s contribution to C20 music. Both in their own way seek to celebrate the work of forgotten ancestors and to provide a springboard for current thinking.

Sixty Poems was conceived by Maggie Harris, the award-winning, Guyanese-British poet, now based in Wales.