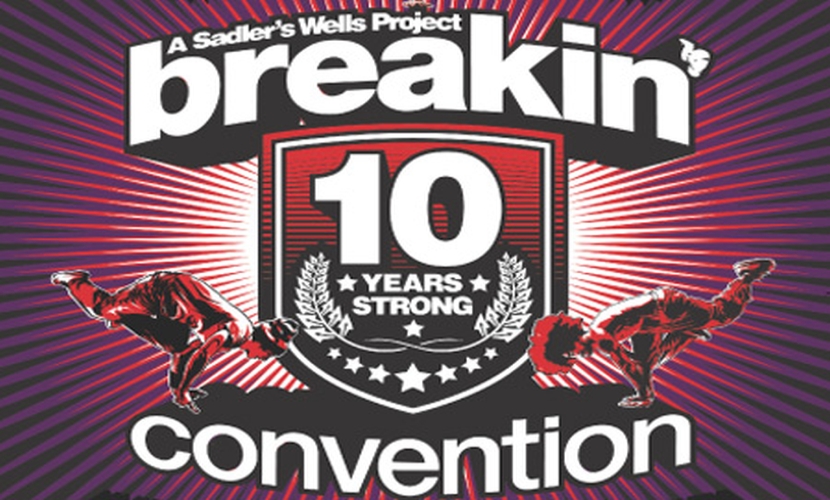 Sadler’s Wells’ internationally celebrated three-day festival of hip hop dance theatre, Breakin’ Convention, is back for its 10th year with a special anniversary programme celebrating the past decade of hip hop dance from around the world and the UK. Over the years Breakin’Convention has been seen by audiences in excess of 90,000 and has hosted over 480 companies from the UK and internationally.

Hosted and curated by Sadler’s Wells Associate Artist Jonzi D, Breakin’ Convention dedicates Monday evening solely to talent from the UK, to celebrate the significant development in home-grown hip hop dance theatre over the past decade. 10 companies have been commissioned by Breakin’Convention to each create work, all of which will have their world premieres on Monday 6 May. The 10 companies that make up UK Night are Avant Garde Dance, Bad Taste Cru, BirdGang, Boy Blue Entertainment, Company Decalage, Impact Dance, Jukebox, Plague, Unity and ZooNation.

Breakin’ Convention has and continues to offer a great platform for young artists, with youth companies being able to present work on the main stage alongside more established acts. On Saturday 4 May Breakin’ Convention will host a special performance by 10Tens, a new company formed by Breakin’ Convention made up of 10 ten year olds. 10Tens will be choreographed by Bruno ‘Boom’ Perrier and Vicky ‘Skytilz’ Mantey of the Olivier Award-winning Boy Blue Entertainment. These ten year olds were selected from auditions that took place in December, and come from all corners of the UK.

Breakin’ Convention’s 10th anniversary programme features performance highlights from past festivals alongside some of the newest hip hop dance forms seen for the first time in the UK.

Last seen at Breakin’ Convention six years ago, legendary pioneers of funk style, Popin’ Pete, Suga Pop, Mr. Wiggles and Shonn Boog aka The Electric Boogaloos (USA) return. Also returning to celebrate 10 years is one of last year’s standout companies, ILL-Abilities (international) a breakdance company that challenges the misconceptions about people with disabilities, who will present their latest work Limitless. Made up of disabled dancers their work spreads their mission statement, No Excuses, No Limits.

Performing for the first time in the UK is NextLevelSquad. This Brooklyn squad developed bonebreak choreography, a technique created from a unique style called “flexing” which fuses bonebreaking, isolation, connecting, and other dance techniques. Featuring BonesTheMachine, this style made up of sequential shapes and shoulder dislocation has an eerie but beautiful quality.

Over the last decade South Korea has emerged as a world leader in b-boying, Project Soul return to Breakin’ Convention with their gravity defying, quick-fire moves, from some of the best b-boys in the world and Storm (Germany) performs the UK premiere of 28 Years in 28 Minutes, an autobiographical work that combines dance, theatre and animation.

Challenging the male dominated world of hip hop and performing at Breakin’ Convention for the first time is French crew Zamounda, a powerful all female dance group consisting of six dancers all from different backgrounds. Well known in the hip hop world, individually members have previously won several titles including UK B-Boy Championships and Battle of the Year. Also from France is Compagnie Rêvolution, who return with their powerful solo from 2007, performed by Emilie Sudre, and British all-female company, Myself UK Dance Company return to Breakin’ Convention with new work.

Breakin’ Convention’s 10th Anniversary features some of the best youth companies from the UK including the PPL who take influence from contemporary dance forms and IMD a new crew from East London and current finalists on Sky One’s Got To Dance.

Finalists in the 2012 UK B-Boy Championships Soul Mavericks (UK) make their debut performance at Breakin’ Convention after touring the world. Choreographer Raw-B from Bad Taste Cru will present work for his new company Kompany Rep (UK), featuring four b-boys the work has been developed in Breakin’ Convention’s Back to the Lab choreographic course, led by Shobana Jeyasingh. Also from the UK, TrashDollys will present work in the studio theatre.

As well as performances from the very best in hip hop dance theatre there is also a full programme of foyer events, workshops, DJs, freestyle sessions and live aerosol art.