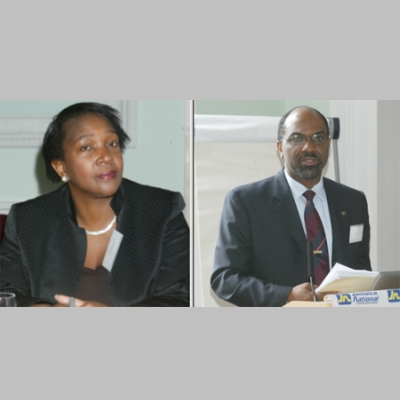 Many Jamaicans in the United Kingdom are living in a legal limbo, without attaining citizenship there and unwilling to return to the land of their birth, says Jamaica National Building Society (JNBS) General Manager Earl Jarrett.

Up to 30 percent of the Jamaicans in the UK could be undocumented, according to findings emerging from the Diaspora Dialogue held in London on September 11. Mr. Jarrett, who chaired the Think Tank, said the aim of the Dialogue was to arrive at workable conclusions to the challenges within the Diaspora community.

“There are still Jamaicans who… are still having difficulties here, because they have not been able to establish themselves as legal British citizens,” Mr. Jarrett said. “At the same time, they are reluctant to return home and exploit their Jamaican citizenship.”

This issue has adverse effects at various levels, particularly in relation to families, Mr. Jarrett said. He added that research is needed to provide reliable information on the Jamaican community to solve its problems.

Solicitor Cordella Bart-Stewart made a presentation to the Think Tank examining whether UK immigration laws should be amended to address the problems being experienced by undocumented Jamaicans. Out of that session, a recommendation arose for the promotion of a better understanding of UK immigration laws in the community.

The goal of improving understanding of the law is aimed at helping Jamaicans in the UK to regularise their status through the legal provisions available, including the appeals process and human rights legislation, the official summary of the Dialogue recommended. Hon. Dr. Ronald Robinson, Minister of State in the Ministry of Foreign Affairs and Foreign Trade, said in his address that the time had come to redefine the concept of the Diaspora. “I think there are a lot of persons of Jamaican heritage and a lot of persons who are not of Jamaican descent who want to contribute to Jamaica and who consider themselves as Jamaicans in a lot of ways.”

One of the challenges for the Jamaican Diaspora was how to modernise the Diaspora Movement, Senator Robinson said. “It is now a question of how are we going to engage these people.”

Aimed at ‘Enhancing the Political and Economic Welfare of the Jamaican UK Diaspora,’ the Think-Tank targeted top business leaders in the UK and Jamaica, members of the Jamaican expatriate community and persons with economic, academic and political backgrounds related to the Diaspora. GraceKennedy and Victoria Mutual Building Society joined forces with JNBS and the University of the West Indies to host the one-day session.