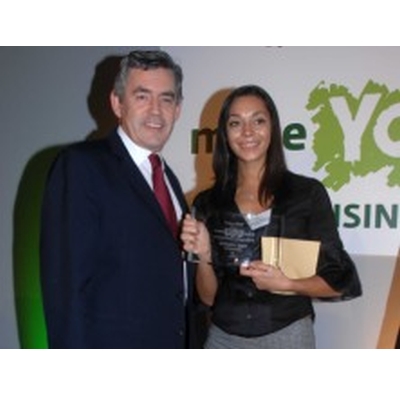 The prestigious win followed Jessica’s double success at the Precious Awards on Monday night when she took home ‘Best Business’ and ‘Entrepreneur of the Year’ for the successful launch of the UK’s first multicultural greeting card range to be stocked in a high-street chain.

The awards, sponsored by the Daily Mail and Vodaphone took place at London’s Hyatt Regency hotel, and Alistair Darling was on hand to present Jessica with her award before the Prime Minister Gordon Brown appeared as Jessica took to the stage and personally congratulated on the Colorblind range.

Jessica said; “It was an honour to have the Prime Minister, Gordon Brown take a personal interest in Colorblind Cards. Starting a business is not for the faint hearted but recognition of this level gives me the impetus to keep striving onwards and help Colorblind Cards realise its potential as a global brand. I am totally delighted and overwhelmed.”

It’s been a tremendous year for Colorblind Cards, with 44 designs from the range now stocked in 100 Clinton Card stores around the UK as well as 50 independent stockists and an online presence on www.colorblindcards.com and www.moonpig.com Colorblind Cards will establish an International presence when it launches in New York in February.

The Christmas range which hits shelves in two weeks and includes two designs featuring fellow entrepreneur Levis Roots of ‘Reggae Sauce’ fame, is expected to be a huge commercial success.