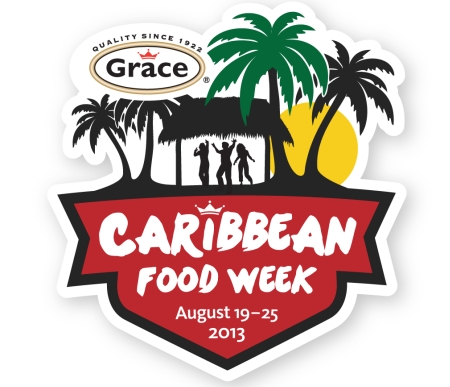 Get in the Carnival mood with Caribbean Food Week!

Caribbean Food Week will once again be the highlight of the summer when it launches for the second year from 19-25 August 2013, leading up to the Notting Hill Carnival on 26 August.

Organised by Grace Foods UK, the UK’s number 1* supplier of Caribbean food and drink, the week promises to be full of fun, food and fabulous flavours.

With a summer of outdoor events, nationwide sampling, new product launches and more, the campaign will be headed up by Chef Hasan De Four, a top chef from Trinidad, who will be actively encouraging people to do at least one thing with a Caribbean flavour, get into the carnival spirit and share it on the Facebook page! This could be anything from enjoying a glass of rum, hosting a reggae-themed night with friends, or trying rice and peas, ackee and saltfish or jerk chicken for the first time.

There will be opportunities to sample Caribbean food and drink and pick up recipe cards and money-off coupons in Tesco, ASDA, Sainsbury’s and Morrisons nationwide thoughout July and August. Lots of great recipes will also be available on the Facebook page, where you can ask questions and share your photos with other Caribbean food fans!

For a taste of what’s to come later in the month, there will Caribbean Food Week stalls at the Grace Foods supported Family Fun Day & Food Festival at Crystal Palace Park on Sunday 4 August.

Chef Hasan De Four is a chef with a reputation spanning from the Caribbean to the UK. As well as accompanying star chef Gary Rhodes on his TV series ‘Rhodes across the Caribbean’, he also appeared on the Hairy Bikers’ ‘Best of British’ programme (BBC2) in April.

Following last year’s successful Week, leading rice brand Tilda and Caribbean restaurants across the UK have come on board as partners of Caribbean Food Week for 2013, helping even more people to enjoy a taste of the Caribbean.

Managing Director of Grace Foods UK, Ryan Mack, said: “Last year’s inaugural Caribbean Food Week was a success and we want to build on that and make it even more of an event that people can really get behind. For most people, the weather hasn’t been very tropical over the last couple of months but it’s a great opportunity to put a bit of sunshine in everyone’s lives and raise the profile of Caribbean food at the same time.”