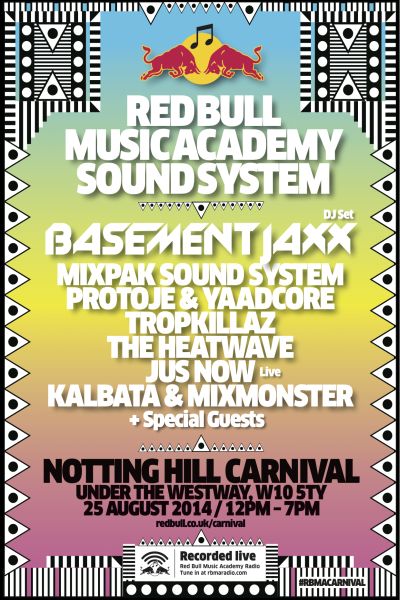 As the Out-of-Offices start tumbling in, and the sounds of summer swell with the chorus of late night hedonism, the August bank holiday rolls ever nearer, and with it the promise of carnival. Red Bull Music Academy Sound System, a stalwart on the carnival circuit, returns with its vibe-infused miscellany of stomach-crunching bass, cocktails, and jerk delights.

Storming the headline slot – the frenetic, magnetic, rabble-rousing antics of UK house revolutionaries Basement Jaxx, dropping their hotly anticipated new album the very same day. Normally found topping the bill at the likes of Glastonbury, Wireless, The O2 Arena, Webster Hall, Pacha and other illustrious stages across the world, catching a DJ set in the more intimate confines of the Westway will be the coup of a lifetime.

With two BRIT Awards under their belts and shows that have become near-mythologised for their heady rambunctiousness, this will be a carnival show-down to remember with special guests to be announced.

They’re joined by a host of acts who’ll be blessing the carnival crowd with their UK debut: Jamaican reggae/dub cohorts Protoje & Yaardcore, Tropkillaz who blend trap and tropical bass with the pelvic rhythms of their native Brazil, and RBMA alumnus Kalbata & Mixmonster, who’s newly released album Congo Beat The Drum (recorded between their studio in Israel and Kingston, Jamaica) sliced through the blogosphere to high critical kudos. They’ll also welcome first-generation dancehall MC Clapper Priest as part of their set.

Soca-fuelled riddim fanatics Jus Now, fresh from repping their hometown at the RBMA Sound System at Bristol’s St Pauls Carnival, are back and bass-laden for the Notting Hill edition, whilst Mixpak Records, home to the sun-summoning likes of Dre Skull, Popcaan, Vybz, and Jubilee, bring their sonic powerhouse Mixpak Sound System to the fray. Finally, feverous bashment crew The Heatwave complete this year’s line-up, bringing the spirit of the Caribbean to the concrete jungle.

Guest list places will be free and available via ballot system, with hopeful entrants able to apply from Monday 11th August until Friday 15th August via redbull.co.uk/rbmacarnival (with applicants being informed w/c 18th August whether their entry was successful).

In anticipation of the annual Notting Hill Carnival, a diverse cast of Londoners attempt to master a selection of must-have carnival dance moves including the Big N Nasty, Tempa Wine, Bruk It Down and Willie Bounce in this Carnival Dance Guide set to GotSome x Jus Now’s ‘Run Di Dance’: https://www.youtube.com/watch?v=UlOonlf_4QE&feature=youtu.be

Find out more at www.redbull.co.uk/rbmacarnival